Seeing as the Meander River level had dropped to 62 cms on the BOM river levels chart I thought it was worth heading there to see if the trout are out and about. The previous two trips here when the river was running at 77 cms to 80 cms weren't all that flash with just one brown being caught on the first trip and four on the second. Today I'm fishing a different stretch of river, so I'm hoping for a few trout to be around seeing as the day is warm and the water temp should be around 10-11 degrees which is 6-7 degrees better to what it was.. No sooner had I arrived when the wind picked up and started blowing a gale, this wasn't forecast for later in the afternoon (3:00pm) not at 10:00 am.

Once in the river I was casting into wind that were reaching around 40 kph which made casting the Mepps #1 Aglia TW Streamer quite difficult, though it was better than trying a small #00 spinner which would have been near impossible in these conditions. Fishing the crystal clear water was very slow going without a sign of a trout over the first one hundred meters or more before I had my first follow. It was from a nice brown that I lured out from under an overhanging tea tree close to the opposite river bank. A few light twitches of the lure as I left it drift with the flow enticed the trout to take the spinner. It didn't last all that long, it spat it as quickly as it had taken it. It was good to finally see & hook a trout after so long fishing in such tough conditions, shame it didn't stay on. A little further on in the same stretch of water I had two more trout follow the spinner before they lost interest in it. Over the next half a kilometre of river I tried several different hard body lures and a mix of Mepps spinners before going with a small well used #00 gold Aglia spinner, one that has caught quite a few trout on other trips.

It's nearly due to be retired after catching around thirty plus trout, the trebles are well worn from continued sharpening that I do after every third fish caught. It just something I like to do, there's nothing worse than blunt hooks on a lure.. I was fishing a reasonably sheltered stretch of river plus the wind had eased off a little, another reason I went for the smaller 1.5 gram Aglia spinner. I spotted a couple of nice flat waters close to the right hand side of the river that was well protected by overhanging foliage, it was the ideal holding area for trout. I was lucky enough to lob my first cast within six inches from the river bank, two turns off the reel handle the spinner was taken & it was fish on. At last I had my first decent hook up from a solid brown that starting leaping non stop across the river. It's great to see them leaping from the river, but when could be your first fish landed for the session, it's always a nervous time. Every jump it does while giving several head shakes one keeps saying “ please don't toss the lure ” and this one didn't, it made it all the way into the landing net. Whoo! Hoo! The drought was broken, I had landed my first trout, a nice well conditioned brown that weighed just on 430 grams. Not a large fish, but who cares when it's the first of the day.. After that I decided to get out and head to another stretch of river a couple of kilometres downstream.

I wasn't very impressed how the day had gone with over a kilometre of water fished for just one trout landed. This river normally fishes so well, I am sure the reason for the lack of fish in it is due to the amount a snow water that's been coming down from the highlands and the majority of trout are still in the lower slower deep flowing areas some thirty five kilometres away. I'm sure once the air & water temps rise more they'll move back into the upper reaches. The next stretch of river that I went and fished was worse than the one I had just finished fishing. With another kilometre of river covered I never had a single follow or sited a trout in it. Once again it was the Mepps lure that saved the day in catching that brown trout early on... I'll be giving this river a miss for another week or so before I have another session in it, hopefully it will fire up for me on my return trip. 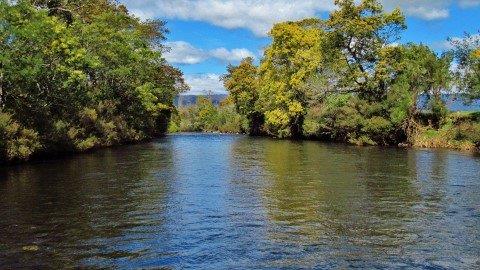 Finally the wind has eased a little 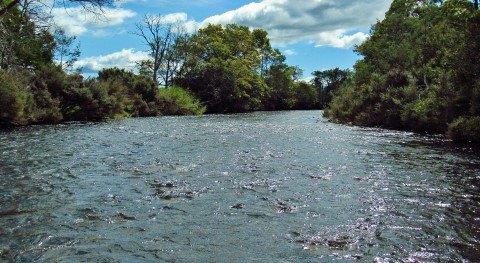 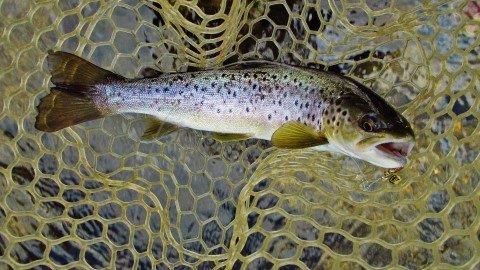 The only trout for the session 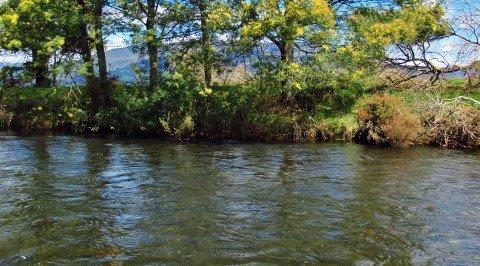 Trout was taken next to river bank 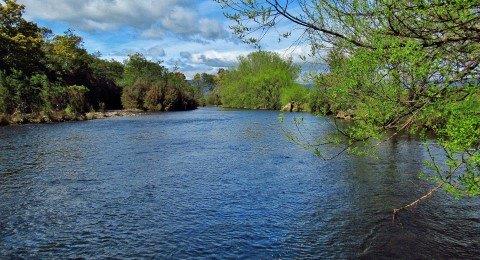 Wind coning straight down the river