Given it was a nice cool morning with a heavy overcast sky I headed off (at 7:25am) to the Meander River again this morning for another spin session. The river was still running clear and had good flow even though it was a little lower than my last trip here. This trip I'm trying a couple of new lures that I picked up from an online fishing tackle store that has quite a few lures on special at the moment. The ones I bought were the Pontoon 21 GagaGoon 45 mm suspending lures named MI perch and MI gold perch and they're only 3 grams in weight too much like the little ghost brown lures I use. So it will be interesting to see how these lures go on the trout... So I started working my way upstream and over the first one hundred meters of never I never sighted a fish.

Good thing was that I found the lures worked a little differently to the ghost brown lures and it took around ten minutes to get used to them. Then the following one hundred I had three light hits and misses from some non aggressive trout, they was the last fish I saw before I decided to get out and and try my favorite stretch of river a few kilometers further upstream. Once there it didn't take all that long before I had a couple of follows, even those trout had no aggression in them either. They just sat back behind the lure for a short distance before moving off. It didn't matter what I tried, slow retrieve, light twitch and even stopped the retrieve and still they wouldn't take the lure.

It wasn't until I was a little further up the river and I spotted a nice narrow flat water close to the opposite river bank and it had a nice bubble line drifting along it. Now that's definitely trout water for sure, and it was too. The first cast into it I had a solid hit and miss, next cast was two meters ahead of where I lobbed the first cast and the lure was taken hard and fast this time, it was fish on at last. It was a nice 440 gram brown that took the MI Perch model lure which was just what I wanted because I wasn't sure if these lures were suited to trout fishing. Now I know they are, it was just on ten minutes later when I had another 460 gram brown take the lure.

After that it was pretty quiet and all I could manage over the following hour was two hits and misses. It was time to move to another spot once again, this time I'm heading to the rocky fast water runs on the river. They're hard yakka but can also be well worth the effort one puts into it and if you know how to read the fast water then you're certainly in with a chance of catching a few fish... Once back at the car it was just a ten minute drive to where I was going to start off my third and last area on the river I'm fishing today. I was rather happy the river level was down to what it was as it would make the wading a fraction easier on the body, not that it going to be easy going here at all. It's still tough going and it's never easy on the body slipping and sliding on the rocks in the fast water on the Meander River... It was slow to start with then the further I worked my way upstream the better this fishing became with two solid browns taken within five minutes of each other, both on the new GagaGoon perch lure.

I decided it was time to try the other GagaGoon gold perch lure now so on it went. Five minutes later I had my first brown on it but it tossed the lure on the second leap from the river... The river may be lower in level. But I can tell you it's not easy going as there's still a good flow of water pushing down it. I probably should have fished this area first instead of the other easy stretches of river. I've been fishing the river since 8:00am and it's now 12:15 PM and I'm already feeling it. I decided I would continue to fish on as long as I could before I became too sore in the body, then I'll call it a day. It was now full on rocky fast water that I was fishing and I flicked the gold perch lure into a nice flat water close to the opposite bank and picked up the best brown of the session in it. The lure had no sooner lobbed in the flat water and within one turn on the reel handle a beautiful brown had taken the lure. In this fast water it gave me one hell of a tussle and was certainly testing the fine 4 pound mono line as it made several runs across the river, then in and around several large rocks. After four minutes of playing this fish I finally had it in the net, it was indeed a beautiful fish, not a large fish by all means, but a quality fish that went 580 grams. It was soon back in the river and on it's way. I changed back to the ghost brown and picked up three more well conditioned brown before I called it a day at 1:45 pm. With just the seven trout caught and released today every trout was well earned and it was certainly hard yakka in the river today.

Oh! One more thing happened with trout number seven too. Once it was in the net it had tossed and turned several times and I did notice the treble hooks of the lure had cut the line. Once I removed the lure from the fish I just let it go, it was then I noticed the line had been cut.. Away went the little ghost brown lure with the fast flow of the river... That was the only downer of the day, the rest was great.. 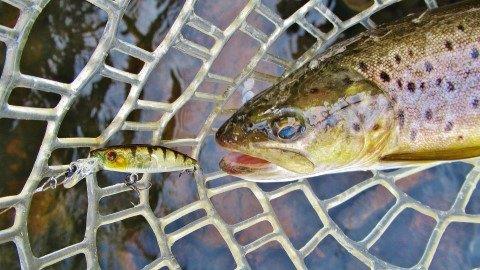 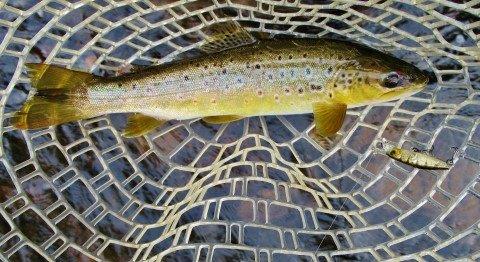 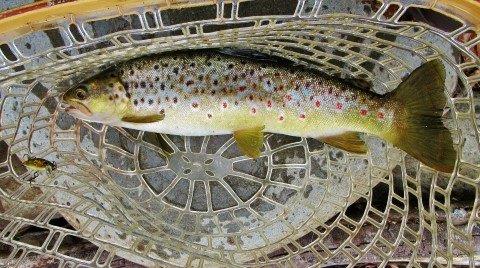 All gold in this Meander River brown trout 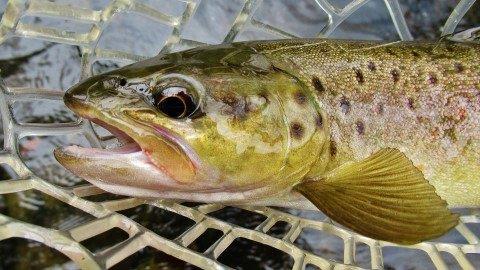 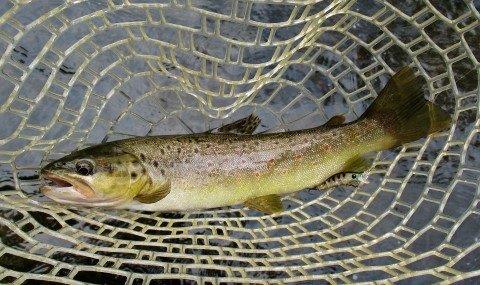 Flat water under treegave up a solid brown Meander River 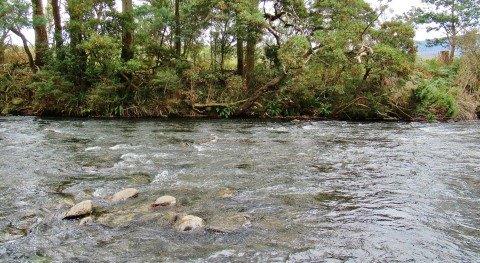 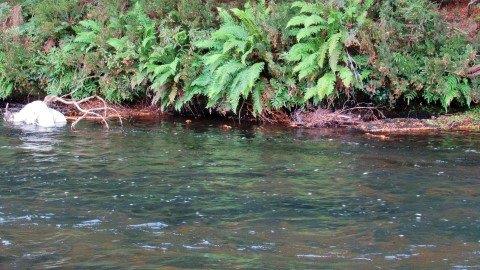