Another warm day was forecast so I had an early start this morning and was in the Meander River just as the sun was on the rise at 6:10 am. I'm fishing a stretch of river that hasn't fished all that well lately, today I'm hoping it will all turn around for the better. The weather conditions were perfect as it was quite overcast and very muggy, but the small flies were an absolute pain in the butt.

No amount of swearing and cursing them sent them on their way either, each cast into the clear cool water still had them crawling over my face. I started the session off with a small gold Aglia spinner to see if it may do the job early in picking up a trout for me. It did attract several browns but no takers, they just followed it. After fifteen minutes I changed to the ghost brown lure, same result follow after follow. I then tried a F3 rainbow Rapala and that didn't even draw the attention of a trout at all and after ten minutes it was time for another change. This time I went for the Mepps black Aglia Mouche Noire spinner and managed to have three light hit and misses, still the trout weren't aggressive.. A light breeze had popped up and those small flies had finally disappeared which was a relief, now all I needed was for the trout to come on the take.

So after and hour of working my way upstream while trying several different spinners and hard body lures that at most times would catch a trout I was fishless. I changed lures once again and this time I went for the Daiwa bleeding tiger hard body in the hoping this may get at least one brown to take it and save the day for me. It did, when I fished a long wide medium flowing stretch of water it was there I picked up my first brown of the morning. It was a beautiful well conditioned female brown that went just on 700 grams, it was soon released back into the river after a quick photo. A little further up the river I hooked and lost another nice brown, things were looking up.. My confidence was on the rise and I felt I may just pick up a few more before I get out of the river. Over the next two hundred meters of river I caught and released four more browns from six hook ups which made fishing here worthwhile after all.. It was now time to move to another stretch of river that I haven't fished all season mainly because it's a very tough rocky stretch of river to fish and it really knocks my body around. I'm giving it a go because I know it does fish well at this time of year so it's worth having a go.

I was soon there & in the river flicking the hardy body around, it was on the second cast & retrieve when I had my first hook up, a nice 420 gram brown. As I cautiously worked my way up the river I hooked and lost two other medium size browns. Using a small hard body in shallow/medium fast water normally catches a few trout but the lure can often jam itself between the rocks too. This happened to often for my liking so I changed to the Mepps #00 gold Aglia spinner and that little light weight lure picked up two more 380 gram browns in quick time.. The the trout went off the spinner so I had no option but to go back to the hard body lures again. I went for a Daiwa brown suji hard body lure, one I bought some time ago but have yet to try out on the trout. This little lure did a top job in picking up three trout over the next one hundred meters of river. I came to a reasonably deep run so I thought I would try a Wildbait hard body here, it's another lure I haven't used for quite some time. This one was a spotted dog pattern, I had three follows from trout before one finally took it and after a short battle it was soon in the net. That was the only trout taken in that short deep run, with shallow fast water ahead of me I changed back to the small bleeding tiger lure..

I had probably covered close on eight hundred meters of river and it was time to get out and head back to the car, I had a few more casts into a wide fast water that had a couple of nice flat spots behind two large boulders. It was here I caught my best fish of the morning, it was a solid 800 gram female and in the best of condition too. It put up a ripper of a fight in the fast water, I was sure I was going to lose it a few times as it made several aggressive leaps from the river. It stayed on and I finally had it in the net, that's when the little hard body fell out of it's mouth. After catching and releasing that brown I called it a day, a long one one that lasted over five hours in the river all up. Of the thirteen trout caught & released today eight of them had the lure pop out of their mouths once in the net, the trout fishing gods were certainly with me today.. 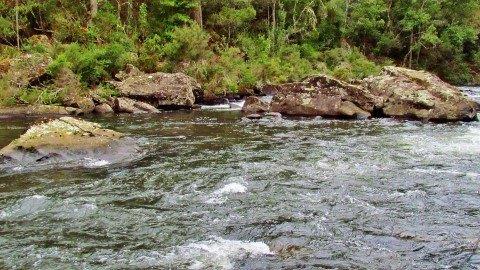 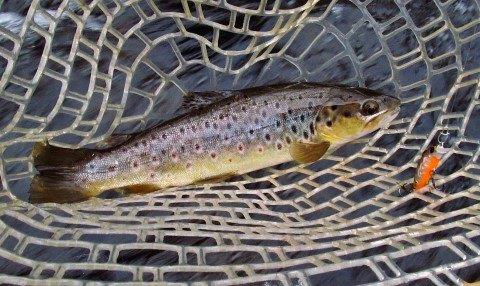 Fish of the day caught here 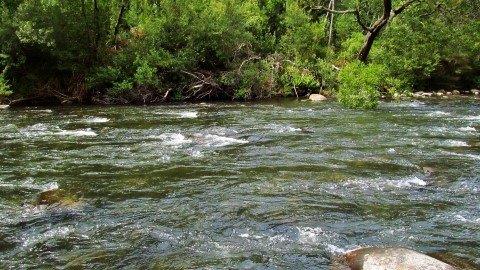 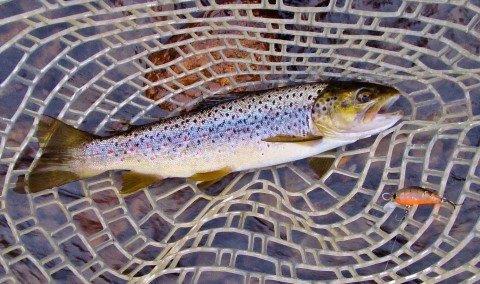 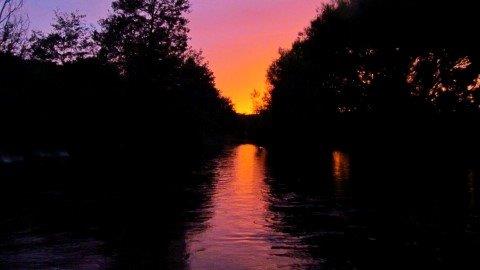 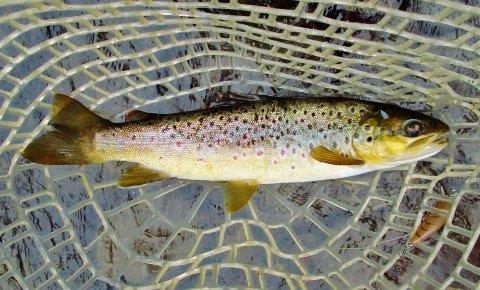