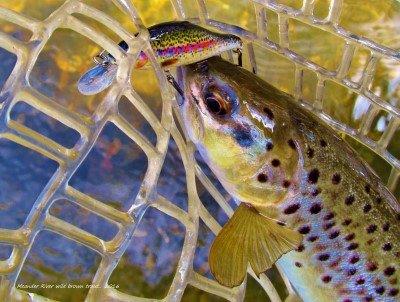 A heavy frosty morning meant for a nice sunny but cool day and also a good one to go fishing in a river somewhere.. I decided it would be the Meander River which is 45 kms from Sheffield. I'm hoping the river level has dropped low enough so I can get in and fish it. I couldn't get a reading of the river levels online due to the gauge still being out of order since the June floods. So I'm going to take the chance and hope it will be okay. Once there I could see it was down and just wade-able going by a log the juts out from the river bank. I have used this log as a gauge for many years now and I know when the river is at a safe level for wading. Today it's borderline, so I decided I would have a session in the river. I'm not going to take any chances though, if I get to a stretch of water that doesn't feel right then I won't be going any further. Besides I'm not sure what has changed on the river bottom either, has it been washed out in places or is it still as it was before the floods. I could see how high the river had been during the floods, the good thing is that there's still plenty of undamaged foliage along both sides of the river.

Once in it I could feel the flow was reasonably heavy against my legs, I still had good footing on the river bottom which was the main thing. I started off using a #0 (2.5gm) Copper black fury and had a follow on the third cast which was good to see. Two more casts, nothing happened so I changed to the spotted hard body lure that worked so well a week or so ago in a small creek. Still nothing happened, no sign of a trout at all after ten casts to most areas on the river where I was standing. Another change, this one was the little rainbow Muzza's lure, another one that I have used and caught a few browns on. The first cast upstream it was taken in a matter of seconds by a nice medium size (420 gm) brown trout. After a brief tussle I soon had this well conditioned fish in the net, photographed and quickly released. I slowly worked my way upstream and had only covered some ten meters of river when I had the another brown take the lure. This fish was a little smaller (390 gm) than the first brown, it too was soon in the net, through the normal procedure and back into the river. I was feeling pretty good now catching two browns in quick time and was all fired up hoping to land a few more. It didn't happen! Over the next four hundred meters of guts busting work pushing my way upstream in what was freezing cold water I didn't have a single follow, or for that matter, sight a fish at all. My legs were now burning with the cold and could hardly feel my feet any more, it was time to get out and move on.

I headed back to the car and drove 15kms to the small creek that I fished last week. Once there I saw the the water level was way down and it had become much clearer too. It's going to be tough here as well with the water being low. Still I'm here, so may as well give it a go I thought to myself. It wasn't over long before I had a small brown take the lure, after a short battle it spat the lure. The water here wasn't warm either in fact it was just on 6 degrees, I was already losing the feeling in my feet just after twenty minutes in it. I did fish on for another five hundred meters for just the one brown caught and released. That was the only fish that I had seen over that distance too.. A stiff breeze cold breeze was now coming straight down the river and I was really feeling the cold and so I called it a day.

Today was the hardest one that I've had on the water in the five trips for this season so far, mainly due to the fact that I pushed myself a little to hard in the deeper fast water on in the Meander River. I was pretty well done after finishing my session there, not that it was a long one (1-1/2 hrs) at all. It was the force of the water on my legs and body while working my way upstream, sometimes in near waist high water that took it's toll on me. Oh well, rest day tomorrow then it back to the Meander River again on Friday with a mate for another session and it won't be the same stretch of river either..

a little deep fast made for tough going meander river 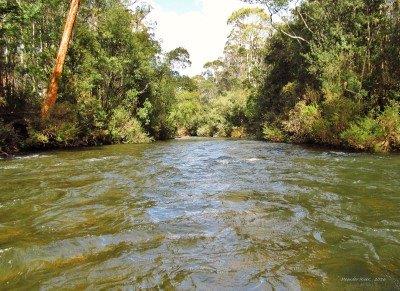 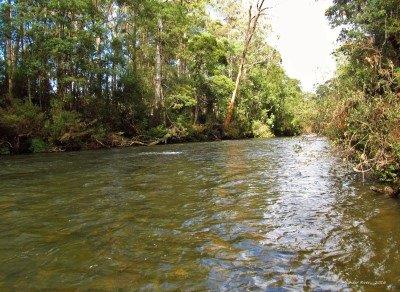 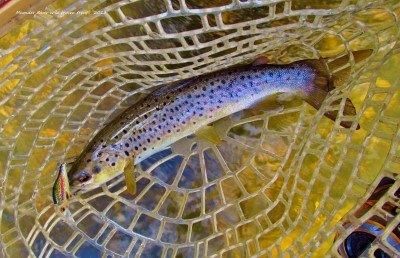