Woke up to hear that it was going to be 21 degrees here in Sheffield today, then when I looked outside there was just a full on pea soup fog to be seen. I had decided yesterday that I would fish the Meander River as I thought with only seven browns needed to reach the 800 trout for the season then this river would be my best chance of doing it. Once there I had a one & a half kilometer walk through thick fog to where I was going to enter the river. It's just as well I know this area like the back of my hand as visibility was pretty low when I headed off through the paddocks. By the time I reached my entry point the fog was a little lighter and the river was like glass, there wasn't a breath of wind. I love fishing in these conditions as eerie as it is.

As usual I started off with the black fury (black blade), up the river I went casting and retrieving too every bit of water that I thought would be holding a fish. Well, I couldn't believe that after an hour of working my way up the river all I had managed was two soft hit & misses. I was sure I would have caught the seven trout by now, but it's not happening at this stage. Then it turned around over the next forty meters of fast water I picked up three browns in quick time, that immediately took the pressure off. Not that I was really under any pressure as I still had 6 days of the season left to get the seven trout, I just wanted it done and dusted today that's all.

It went quiet again over the next four hundred meters before I caught my forth trout for the morning, another nice medium size brown. A little further on I had a couple more take the spinner but lost both fish. I was now back to where I had parked the car so I decided to head on upstream and fish my favorite stretch of fast water. I know that I will catch what I need there in no time at all. It only took two casts before I was onto a nice little brown, lost it when it jumped & tossed the spinner. This is the chance one always takes when fishing fast water, like I've said before it's smash & grab for the trout in them. A lot of fish are just lipped and it only takes one or two jumps combined with a head shake to quickly toss the spinner.

Twenty meters further up I was onto another small brown, three casts later I had another brown on & soon in the net. Only need one more trout now to reach my target. Well I lost the next two before I finally had a solid take and this fish was well hooked too. I was still a little nervous right up until it was in the net, number 800 for the season was here. I gave myself a little ''You Bloody Beauty'' then quickly took a photo of the trout then released it. I decided to fish on for close on one hundred meters before calling it a day. I came across a fast water that had a bit more depth to it than what I had been fishing so it was on with a gold Blue Fox vibrax that Rex Hunt had sent to me. I like these spinners in the deeper runs as they're a gram or two heavier than the little Mepps #00 spinners I use. I do have some bigger Mepps but, I do like this #0 vibrax spinner. It didn't take all that long before I had another brown in the net and after a quick pic it too was back in the river. It was back on with the little black fury once more as I was back into the shallow runs. I picked up two more browns here before calling it a day. It was a day that finished a lot better than it started that's for sure... Ten browns caught & released wasn't all bad in the end. 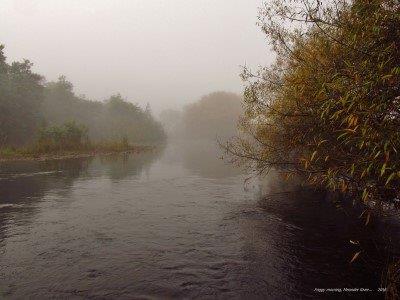 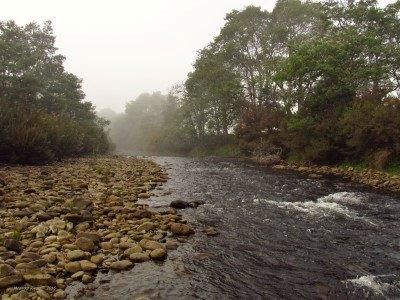 A little on the foggy side this morning Meander River 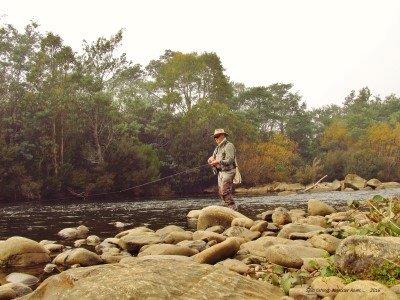 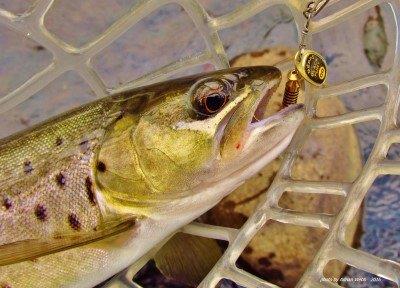 Trout No. 800 is in the net Meander River 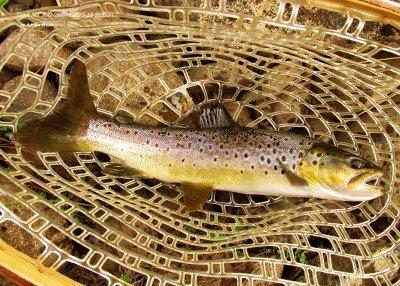