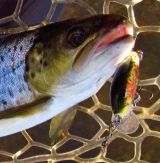 The forecast this morning (Weds) was for the winds to be easing off so I had decided I would head off later in the afternoon to see if I can crack the 500th trout for the season. Well, by 2.30pm here in Sheffield the wind had dropped right off to a nice light breeze which I was happy with. I was soon on the road heading on over to the Meander River once again. Trying another area quite some distance away from where I have recently been fishing. I arrived at the river just on 3.30pm to be greeted with another howling gale. I just couldn't believe it and did seriously think about turning around and heading back home. Not being one for giving in easily I decided I'd give it a go even though the wind was blowing straight down the river. Catching the nine trout required to reach the target wasn't going to be easy at all.

The gale force winds meant I would just have to up the size of the black fury spinner that's all to get the distance and carry in this wind. After a 40 minute walk I finally reached my entry point and it didn't seem all that bad there. This was mainly due to the good cover along the river bank and the the wind was coming straight across the river. The first two hundred meters of river was very quiet and all I had was follows from a couple of medium sized browns. They weren't very interested in the spinner today so I changed over to the F-3 Rapala rainbow pattern in the hope this may get them to play the game. It was the right decision because it wasn't long before I had my first brown in the net. Another twenty meters further up I had my second brown landed and everything was looking quite good. Well, it was good until I had to fish my way around the bend in the river and face the wind head on. 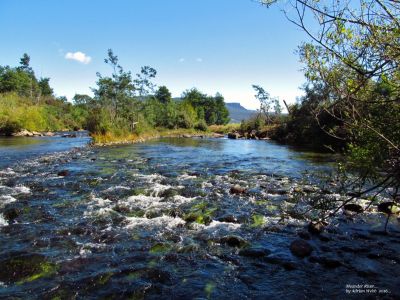 I had to wait for the short breaks in the wind gusts before I could flick the two gram Rapala to where I wanted it to land. Several times the wind gust hit as the lure was sailing through the air and suddenly it was back within a couple of meters in front of me. This wasn't the only problem, it was what I call wind loops that are created in these conditions. It happens during the casting of the lure when the wind peels extra line from the spool. But this is what trout fishing is all about when fishing in these conditions and it certainly tests ones temperament at times. I know it was fully testing mine today and I did manage a few choice words several times. I was now into a long narrow run of fast water that was lined with a mass of tea trees and this did give me a little bit of wind resistance. This allowed me to flick the Rapala across to the small flat water under the bushes, this one hundred meter stretch gave up five browns in a row. I was on a hot streak that's for sure. All of a sudden I had jumped to catching seven browns without losing a single fish. I now only need another two trout to reach my target.

With that narrow fast water out of the way I was now back into a much wider and slower stretch of river which was more open to the wind once again. I had now covered close on a kilometer of river and still had at least another one & a half kilometers ahead of me before I was back to the car. I really wanted to get out of the river right now as it was getting near impossible too cast the lure in the head on wind. I had to fish on because where I was there was no way out as the low scrub was chock full of blackberry bushes and no way was I going to ruin my breathable waders getting through that mess. I new there was an opening some two hundred meters further up so I thought I'll just stick to the middle of the river and work the lure along the bush lined side of the river.

I had just on thirty or so meters to go before I could get out of the river when I picked up trout number eight, then not long after that I finally had number nine and the 500th trout for the season in the net. I must admit I was a little nervous playing this fish and hoping it would stay on at least until I slipped the net under it. It did stay on all the way and even when it was in the net the lure remained in it's jaw. I can tell you I was pretty happy when I slipped the net under that fish. I had one more cast towards the river bank where I was about to exit the river and picked up another brown making it ten for the session, that also made it ten fish from ten hook ups something I haven't achieved since 2009-2010 season when I landed 17 straight and 49 trout for the session from 55 hook ups. That was back when I had my best season ever. I was now out of the river and had the one & a half kilometer walk back to the car, I was smiling all the way too..

Trout number 500 for the season.

Howling gale on the Meander River 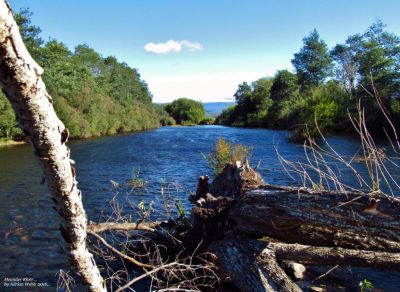 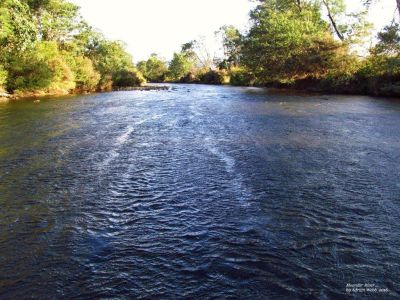