First rainbow trout of the season

Another change of weather is on the way, this time it includes thunderstorms and heavy rain so I made a hasty decision to head off the Mersey River before the change arrives. I checked the river levels online and saw that the river at Weegena was down to a reasonable level that was fairly safe for wading. It was 7:40 am when I hopped in the river and the first thing I noticed was the water temperature was sitting at 10 degrees which was good to see.

The lure of choice to start with was a #1 Aglia Furia, a great all round Mepps inline spinner that does a good job on the trout. The water I started off in was perfect for casting and drifting the spinner which I did for around 20 minutes without a hit from a trout. It wasn't until I had moved a little further upstream and cast the spinner into shallow flat water, no sooner had I started to retrieve the Aglia Furia, it was taken by a medium size trout, it gave a solid head shake and tossed the spinner, that trout was gone in a flash. It's hard enough catching a trout in this stretch of water at this time of the season, hooking and losing one early into a spin session never goes down well either.

The left side of the river is the shallow side and the safest way to fish my way upstream and that's what I did, the only trout I saw was a couple that I spooked as I made my way upstream. I came to a section of river that was divided from the mainstream, it's one that I never bypass either as it's given up a trout or two from time to time. The first few casts and retrieves there wasn't a sign of a trout, I was about to move back into the mainstream then had one more cast and retrieve into a shallow piece of water close to the river bank, on the retrieve a small brown took the spinner. This little trout stayed on, it was well hooked and did it's best to toss the spinner but failed to do so.

After an hour in the river I finally had my first Mersey River trout of the season in hand. After it's release I made my way back to the mainstream right where there was a stretch of fast flowing water. This water was flowing too fast to be holding a trout, but there was a nice small flat pocket of water behind a boulder that may well have a trout in it. The plan was to cast the lure a few metres upstream past the boulder and let it drift back with the flow and into the flat water. I did this several times without any signs of a trout, I was about to move off then gave it one more go. This time as the spinner drifted into the flat water a trout had a crack at the lure, it missed being hooked, so I moved on to the next stretch of water.

This stretch of river was wide and a little deeper than normal due to the river still running a little on the high side, I'm staying on the left side of it where it varies from just below the knees to twelve centimetres above the knees. From the middle of the river to the opposite side of the river it goes from waist deep to two and a half meters. Waist deep water can be tricky most times when fishing, even more so when the river bottom is unstable due to it being covered in a variety of small to large slippery rocks. It's best to stay well clear of these areas unless it's absolutely necessary, there's nothing worse than slipping on a rock and taking a dive into water that's above the waist. It's bad enough when one takes a tumble in knee deep water, I know that from experience, I've been there and done it.

The left hand side that I was fishing from is slow flowing water, the further one goes to the right the faster the flow is and there won't be any trout there until the water level drops. I slowly made my way upstream casting and retrieving the Aglia Furia when I noticed a couple trout surface feeding in shallow water next to a small outcrop of reeds. I had no idea of their size either and I presumed they were brown trout as well. I watched them for a minute or two wondering what lure I should change to, with the water being shallow the #1 (3.5 gram) spinner will spook them if I lobbed that anywhere near them. I was in two minds whether to go for a #00 (1.5 gram) or a #0 (2.5 gram) spinner, I decided to go with the latter size to get the extra distance and lure of choice was a March Brown Bug spinner.

The first cast and retrieve was well past where the two trout were surface feeding, on the retrieve the lure came down to where they were, both trout chased it, one had a go at it and missed taking the treble hook. With it being so overcast and dull conditions here I still couldn't see if they were browns or not, I assumed they were browns anyway. The next cast was into the same area as the first cast, this time as I retrieved the Bug spinner towards them one of the trout darted out and smashed it. No sooner had it taken the lure it took off and ran hard and fast at the same time making several leaps from the water, it was a solid fish and a decent size too. After what seemed like forever I had it in close enough to see it was a beautiful rainbow trout, the fight had gone out of it now and I eased it into the net.

It was a beauty, even better it was a decent sized fish that went 610 grams and it also was my first rainbow trout of the season.That was the one and only trout caught and seen in that slow flowing stretch of water and it wasn't until I moved into a stretch of fast flowing that had several flat waters on either side of when I caught my second rainbow after changing back to the #1 Aglia Furia. This fish was taken in shallow flat water close to a fallen tree on the left side of the river twenty directly ahead of me. This fish ran straight into the fast water and played merry hell doing it's best to toss the spinner, it didn't, fighting for it's freedom in the fast water only tired it out and it wasn't long before it was landed. This rainbow was like the one caught earlier, a solid, beautifully coloured well conditioned fish, it weighed 590 grams.

Like all the trout I catch (unless they have gill damage from taking the lure deep in the throat) it was released back into the river for another day. From here on I struggled to find a trout in the water, mainly because it was all fast water now with very few flat waters that could be fished. I did manage to catch one more small brown that took the spinner as it passed through a small pocket of water behind a boulder in the middle of the river. After it's release I fished on for another twenty minutes, the waters I fished were a mix of fast and medium flowing waters, one follow from a trout was all I could manage, my day was done at 10:10 am. It turned out to be a better day than expected too, the two highlights of the spin session were the two solid rainbow trout that I was lucky enough to catch and release. 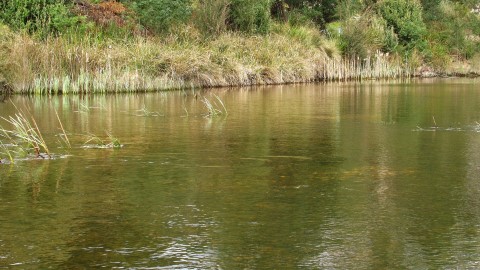 Adjustment made to the treble hooks 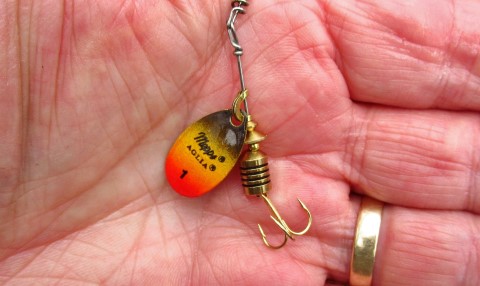 It took an hour to catch the first trout today 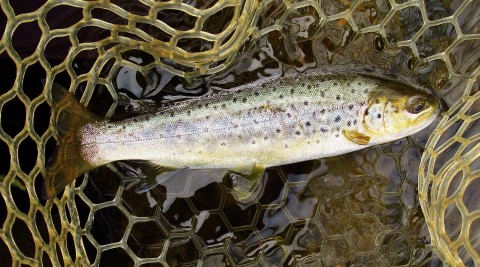 My first rainbow of the season 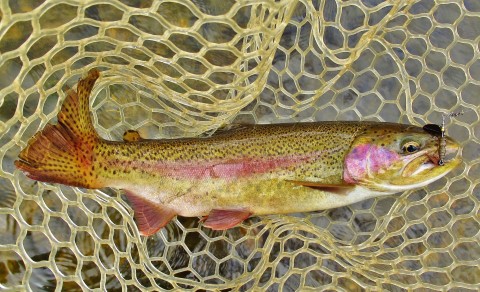 The second rainbow of the day 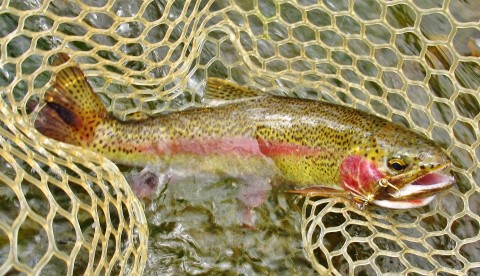