Calm humid conditions today that were ideal for trout fishing saw me head up to Weegena to chase the trout in the fast waters of the Mersey River. I wasn't in a rush to get there seeing it was overcast and humid, it was 8:10 am when I arrived at Weegena. From where I parked the car I had a fifteen minute walk to the fast water I was going to fish, on the way I bypassed a long wide slow flowing stretch of river that had a lot of trout surface feeding in it. There were black spinners hovering above the water surface that had quite a few trout fired up as they were leaping from the river trying to grab a few.

Had there been light rain or a ripple on the water from a breeze I wouldn't have bypassed the slow flowing water, I would have fished it with the Mepps stone fly Bug spinner. Given the water was like glass and the trout surface feeding I knew it was a waste of time trying to pick up a trout there, that's why my mind was set on fast water fishing for trout today. It was nearly 8:30 when I finally hit the water and started flicking a #0 stone fly bug spinner up and across the fast water only to find there was a lot of water weed & green algae in the river, more under the water than on top of it.

It wasn't so much that the weed was a problem although it did restrict where I placed the spinner in the river it was the green algae that fouled the Bug spinner. The spinner only had to touch a rock or go close to the weed and it became fouled with green algae. I had to be pretty particular where I cast the spinner, even the cast and drift method I use with the lure was becoming a problem in most sections of fast water because of the algae. I decided to changed lures, it was off with the 2.5 gram #0 Bug and on with a 1.5 gram copper #00 Aglia Mouche Noire, being a much lighter lure it wouldn't run as deep.

It was 8:50am when I cast into a narrow fast water run that had a large boulder in the middle of it at the headwater, it was here I had my first hook up. A nice sold brown had taken the lure, it made a few runs and leaps from the river before heading into the water weeds where I managed lead it out of, this fish wasn't giving in. I made the big mistake of messing around getting the camera out to film it while holding the rod in one hand with a fish that was still full of fight instead of leading it into the net when I had the chance to do so. It kept pulling hard on the line while I was trying to turn the camera on that's when it broke the surface and gave one almighty head shake and tossed the lure.

Boy, did I curse myself for messing around with getting the camera out which cost me landing the first trout of the morning. Not that it was a large fish, it was probably in the 450-500 gram range, it's just the fact I put filming the fish first instead of landing it. It wasn't until I moved into a wide fast water run when I had a small/medium (280gms) size rainbow take the copper Mouche Noire as I let it drift with the flow. I could see it was well hooked so it was out with the camera for a short bit of filming before I slipped the net under it. At last I had my first trout of the spin session in the net.

From here on I hardly saw a trout over the next two hundred meters of fast water, two follows and one light hit and miss was all I could manage. Three hundred meters of fast water that normally gives up six to eight trout any other time I've fished it gave up one rainbow trout, it was hard to believe they just weren't here. My day was done, with just the one trout landed from two hook ups wasn't one of my better days in this fast water at all. Perhaps they had moved into the slower flowing water to feed on the black spinners and other insect life that was there in the thousands. January is always my worst & one of my toughest months chasing trout, I'll be glad when February is here or if & when we get a big downpour of rain. 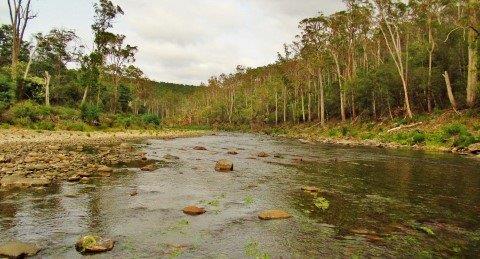 Even the fast water has water weeds in it 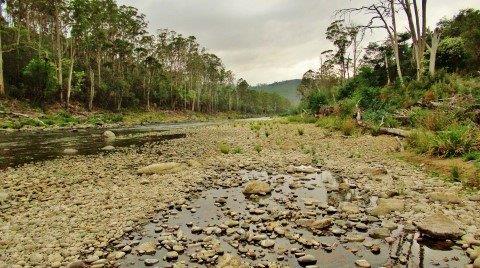 Not an easy walk back to the car from here Weegena 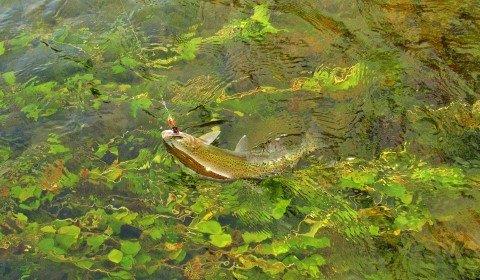 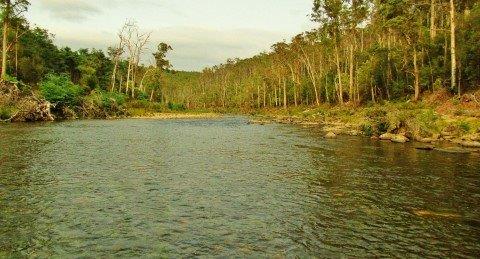