Fine warm weather was forecast for today but when I looked out the window this morning it was windy, very overcast and quite cool. I had intended to fish the upper reaches of the Mersey River then changed the trip to a small tannin stream. I was hoping it may still be at a reasonable wading height after the 6mms of rain we had a few days ago but I wasn't expecting too much. No sooner had I arrived the cloud started to break up something I didn't want to happen after seeing how low the water level was.

It was well down and I wasn't sure whether or not to give it a go or continue on to a larger river elsewhere. The only reason I decided to fish the small stream is that it's sheltered from the Northerly wind that was blowing around 15-20 kph. One thing I did know, today would be a day of using the Mepps small #00 inline blade spinners and the March Brown bug spinner was the one I started off using as it did a reasonable job last time in the small stream. The reason for using the #00 (1.5gram) spinners is because of the low water levels, anything heavier will bottom bounce and become fouled with algae.

The lighter the fishing gear and tackle in these conditions the more chance one has of catching a few trout, even the slightest noise or moving shadow will send the fish scurrying off, catching trout in low water was still going to be a challenge today. I was in the water by 8:20am and the first few cast and retrieves with the March Brown spinner drew the attention of a trout that followed the lure on all three retrieves but there was no sign of aggression from it. The low light tannin coloured water was going to make for a pretty challenging spin session today, it wasn't going to be easy.

It's days like this that I really like chasing trout, it's the challenge of selecting the right spinner and having to work it to turn the trout from just being interested into full on aggression.. To me that's what trout fishing is all about, out smarting a brown trout is a challenge on it's own. There's been plenty of days when they've come out on top too, I don't always get the better of them. For some reason the months of October, November and December are the most challenging times for me and that's probably due to the large hatches of insects that occur during those months, I still manage to out smart quite a few trout but never as many as I would like.

Anyway back to how the spin session went today, it was one of those days when I had to make quite a few lure changes. Firstly the March Brown spinner attracted the attention of a couple of trout but didn't produce a single take. A change to a Copper Aglia Mouche Noire attracted a couple of follows and one hook up from a small brown, that fish tossed the spinner. The copper colour wasn't one the trout were really into either so it was over to a well worn gold Aglia Mouche Noire, a spinner that's caught around 40-50 trout over time. While looking at the next stretch of water I noticed a trout rise and sip something off the surface, it was in close to a old log on the left side of the stream.

I knew where my first cast was going to be and I lobbed the spinner around six inches out from the old log in the same vicinity where I spotted the surface feeding trout. The lure had no sooner hit the water it was snapped up by the trout, I had caught my first fish of the morning. A little further up I picked up another small brown that fell to the spinner on it's second go at it, that fish was taken in just three inches of water. The cloud had fully dispersed and the water now in full sun which was really going to make it tough for catching trout from here on. I did managed to catch and release another small brown from three hook ups on the gold Aglia Mouche Noire before changing over to a Stone Fly Bug spinner.

That spinner started off well in having a trout have a crack at it on the second cast, that fish missed getting hooked. A little further up I did a backhand cast across the stream to lob the spinner into a shaded run, on the retrieve a nice brown darted out and took the stone fly lure. My fifth trout for the spin session was landed and soon released back into the stream. A similar thing happened a little further up the stream when a small trout darted out of nowhere before it lost interest in the stone fly bug spinner. Another change was needed so this time I went for a black blade Aglia Mouche Noire.

I felt it was best to stick to black with the sun being full on the water and with the water being clear the copper and gold blades were too bright to be used any longer. Again the change of lure did the trick, I went on to catch another four small browns from seven hook ups before calling it a day at 12:35pm. Catching nine trout from thirteen hook ups for the session was a pretty good result giver the conditions today, a good challenging day in a low and clear light tannin stream. 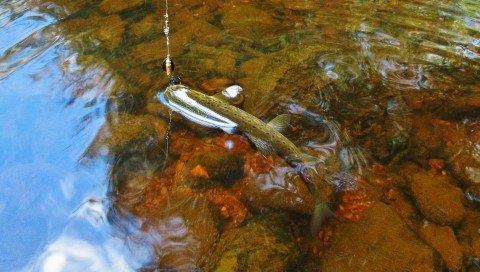 Aglia Mouche Noire did the job 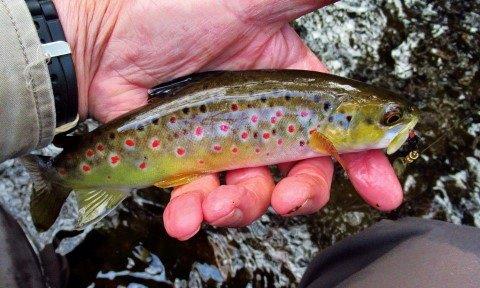 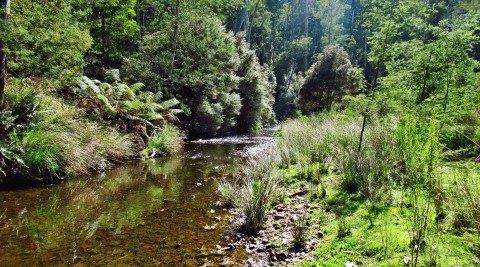 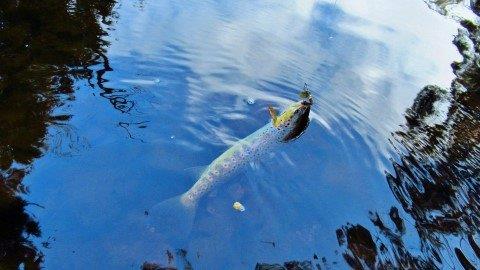 This little brown went for gold 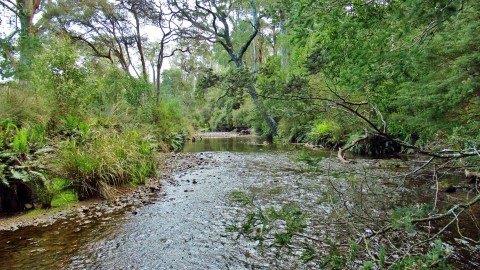