The morning was a low three degrees as I was heading to the upper reaches of the Mersey River, then I had a change of mind and decided to head to the small tannin stream I fished several days go. On my arrival I found the water level was the same as the last trip (a little on the low side) so I thought I would be in for another tough time fishing here. This trip I thought I'd start the session using a copper blade #00 Mepps Aglia Mouche Noire to see how it would go on the trout in the tannin water, not that the copper colour would be a problem as it's worked well before in tannin waters.

If the trout don't go for the copper then I would go to the gold blade spinner, that's been the colour that's got them going for quite some time now. Besides, one can't stick to the same colour all the time, it's always worth trying another colour.. I was in the stream by 8:00am and it wasn't until 8:45 before I had my first trout hooked and landed, a solid 420 gram brown. Fifteen minutes after releasing that brown hooked and lost another before I caught my second medium size brown forty five minutes later. The fishing was a little slow at this stage until I started to pick a few up in reasonably quick time. Like all trout fishing in small streams or even in the rivers is does fluctuate quite a lot.

By 10:15 I had caught and released five nice trout from 280 grams up to 410 grams which I was feeling pretty happy with, it was a big turn around from the last trip here when I hooked and lost a lot more than I caught. It did drop off a little until I got further up the stream when I started catching them on a regular basis on the little Aglia Mouche lure.. I moved into a stretch of the stream that I hadn't fished for around four years and I was hoping the trout will be on the take here as well. One thing that was happening throughout the spin session was that the small trout were quite aggressive where as the larger trout really had to be coaxed into taking the lure. The larger trout would come up behind the lure and sit behind it as I retrieved it.

What I had to do was to continually twitch the rod to make the spinner blade flutter, even then they didn't attack it full on. What happened is the larger trout would mouth the spinner and swim with it, once I felt the drag of the spinner had stopped that's when I had to set the hooks. Several times all I did was to pull the spinner from the trout's mouth, it's something I rarely come across all that often, today was one of those rare days. The good thing was I did catch all but two of the larger browns that did this today.

Continuing to fish my way upstream I was still picking up a fish here and there before the wind arrived bringing some light rain with it. Once that arrived the fishing slowed down, so did I as I had been in the river for nearly five hours, the body was getting sore. It was time to call it a day and with a total of twenty one trout caught & released I was satisfied on how the day had gone, much better day in the stream than I had expected. After a forty minute walk back to the car it was nice to get out of the fishing gear and sit down and have a Pepsi Max before heading for home.. 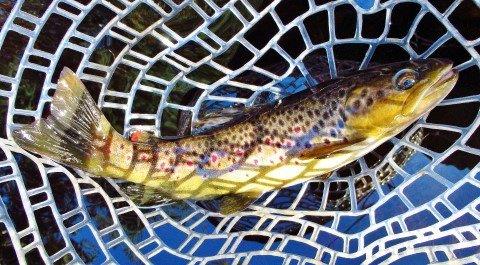 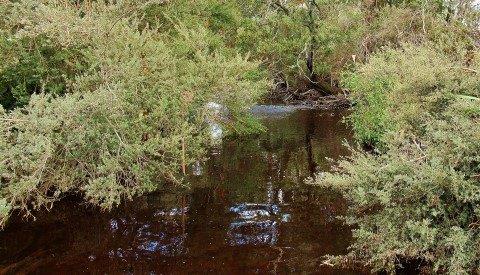 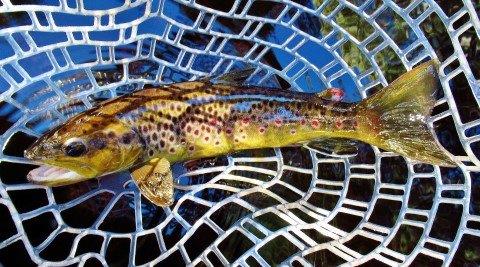 Some beautiful colours in this wild brown trout 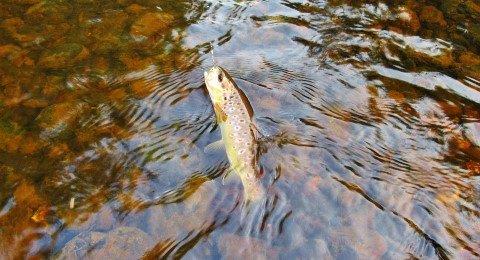