With overcast damp conditions today I headed over to the Mersey River, soon as I arrived (5:45am) I saw trout surface feeding in the wide slow flowing water. Seeing that always means I'm in for a tough session & as it turned out it was just that. I still flicked the Mepps spinners & a few hard body lures around in the slow flowing water for just the one follow. Heavy rain was forecast for later in the day, at the moment it was just a light drizzle on and off which I didn't mind. I decided the only place I'll catch trout today was the fast water runs, that's where I headed.

The area I'm fishing only has four stretches of fast water and they're well apart from each other too.The first one I fished is usually the most reliable stretch of fast water that always gives up a couple of fish wasn't all that good today. It took me close on fifteen minutes before I finally hooked my first trout of the session only to see it toss the spinner on the first leap from the river. That was the only hit I had in there so it was onto the next fast water, another one that regularly gives up a rainbow trout & has often saved the day for me many times. This fast water, like the last one is perfect for the cast and drift method I love doing with the Mepps spinners.

It took a few minutes of casting & drifting the spinner with the flow when it was taken by a solid rainbow. My savour had arrived and it was well hooked too, it made several leaps and runs before it tired and I had it in the net. It was 7:05 am (time in the camera) when the fish was landed so it had taken a while to get a score on the board. Once I reached the top end of the fast water I had a few flicks around the tail end of a long wide stretch of river, it was here I picked up two small browns in very quick time. The next fast water was a long way up so I went inland then walked close to 400 meters until I could see the tail end of it where I needed to get to.

To reach the river I had to bush bash my way though fifteen meters of head high grass & thick foliage, I made plenty of noise getting through it too. After catching a few more small browns on the Aglia Furia I changed to a gold Black Fury spinner. I wanted to give this gold lure a workout in this deepish fast water run, a stretch of water that gave up a few browns & a couple rainbows last time I fished it. Well, it wasn't to be this trip because this beautiful fast water run never gave a yelp, not a single hit or follow from a trout. I couldn't believe it as it's the best fast water run of the lot in this area. With just the one fast water left to fish things were looking a little grim at this stage of the spin session. I went back to the Aglia Furia to fish the last stretch of water, it was here I picked up two browns and a beautiful rainbow (450 grams) which was the best fish of the day.

I was just about to head back to the car when I spotted a few trout on the rise in the tail end of another wide slow stretch of river. I thought I'd flick the spinner up and across the river and do a slow retrieve while giving the spinner a light jerk every so often. It worked, I picked up a small brown which finished off my spin session at 9:20 am. It was quite warm now as the cloud had thinned out and the sun was poking through, it was a long hot walk back to the car. I arrived at the car at 10.20 am totally buggered... 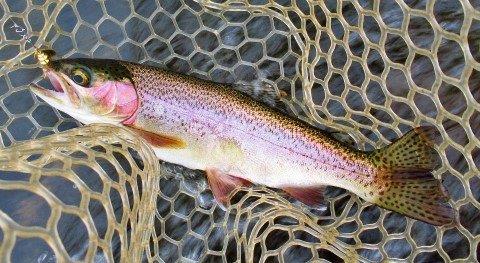 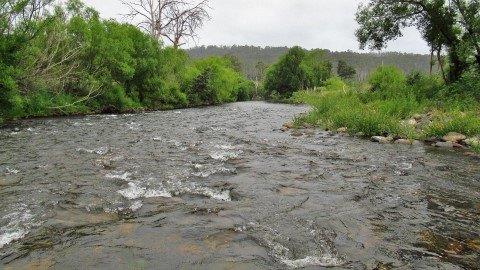 First trout of the day 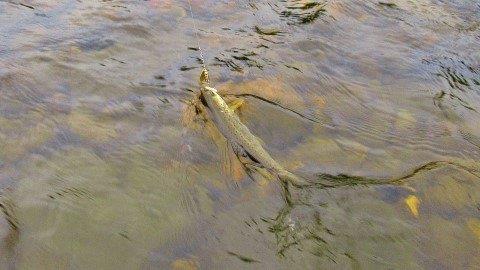 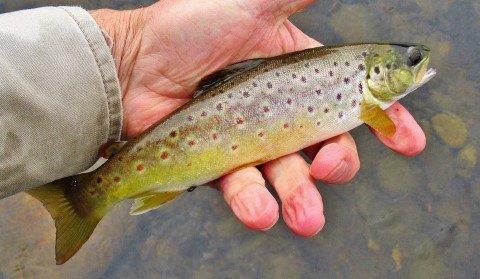 The last trout of the day a small wild brown trout 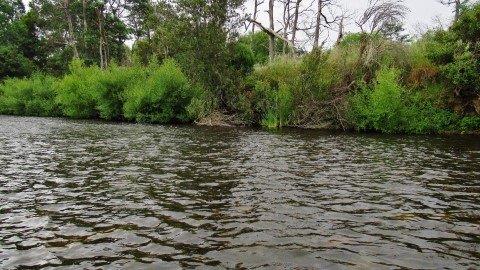 The rainbow lured from the river bank