A gusty Easterly wind was forecast as the day went on so I hit the Mersey River just after 8:00 am in what was a lovely morning with overnight fog lifting and no wind to worry about for now. I spotted several trout on the rise in a wide open stretch of water which was a good sign. Seeing them on the rise meant there were a few insects around, so I'm hoping the fishing may improve here at last. I started of using a #1 Mepps Aglia TW Streamer spinner, mainly because it has a small fish like streamer attached to the main body.

I have caught a few trout on it from time to time, I'm hoping it may suck a fish or two in this morning. Ten minutes had past and I hadn't had a follow or a hit so I changed to the #1 Aglia Furia thinking the red, yellow & black coloured blade may attract a trout. I had a couple of hit and misses before a rainbow took it, this fish stayed on, it had taken an hour & a half to catch my first fish. It was another hour before I hooked another trout but it tossed the lure, thankfully it was a only a small fish. The fishing was very slow going, not only that the trout weren't on the rise any more.

A light Easterly breeze had started coming up the river from behind me which wasn't a problem at this stage. It was now time to try a hard body lure, I went for the small Pontoon21 greedy guts lure. It wasn't all that long before I picked up another small 290 gram brown trout at 11:25 am. Then I hooked and lost another brown on it a little further upstream. Just ahead of me was a deep wide stretch of water so I hopped out and bush bashed my way along the river bank to where I could see it was at a safe wading depth.

I had a couple of follows from two very nice size browns, both times they just sat a few inches off the lure before turning and moving off.. Another change of lure happened, this time I went for the little Atomic Hardz shad4 in the ghost gill brown colour, the same lure that I had lost and found twice in two years. It was on the second cast up and across the river when it was taken by a nice solid (420 gram) brown, this fish made it into the landing net. That brown was followed up with a medium 310 gram rainbow, the change of lure has worked a treat. Another cast up and across into a fast flowing water another rainbow took the little ghost brown lure.

This was a much better fish and after a good tussle I had it in the landing net, it was a solid 460 gram fish. I've hit a stretch of water that's holding quite a few trout and so far they've all been a reasonable size for a change. Then I lost two browns in a row, the first one lost being in the 1.5 kg range which was a little disappointing.. I noticed several trout jumping in a fast water run ahead of me and I could see quite a lot of caddis moths hovering above the surface as well as some black spinners. I moved a little further up the river and started to work the fast water.

Two casts was all it took when I was onto another solid trout, it was a brown that made several runs and leaps in the fast water before I had it safely in the net. This was the best brown caught so far, it went 450 grams. The very next cast into the same area resulted in another brown being hooked and landed, that fish was soon followed into the net by an nice 430 gram fish.

My catch for the session was five browns and three rainbows, this one stretch of water turned it all around from what was a dismal spin session into a pretty good one. Then it all changed for the worse, the Easterly wind picked up and blew like hell. Immediately the trout shut down, the insects were gone and so were the fish. I fished on for another hour & ten minutes without a single touch or even seeing a trout.

Thankfully I had decided to fish that stretch of river when I did because the end results may not have been as good.. It was 1.45pm when I arrived back at the car feeling pretty satisfied of how the session went. I was very bloody tired too, it had been a long tough day covering just over 1.5 kms of river... 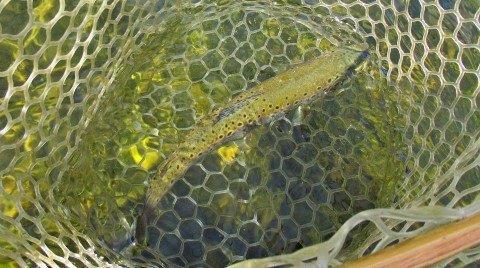 A nice brown ready for release 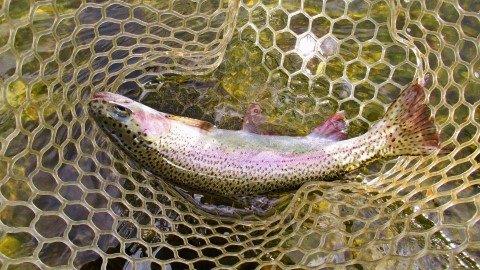 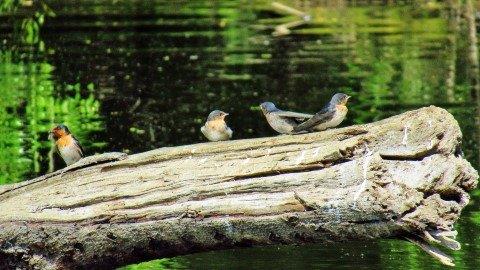 Mum and her babies 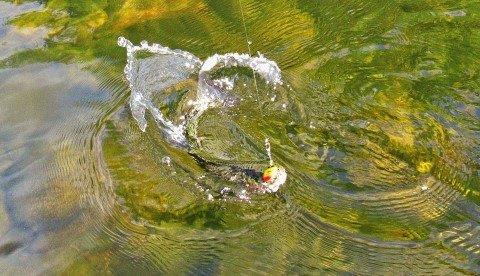 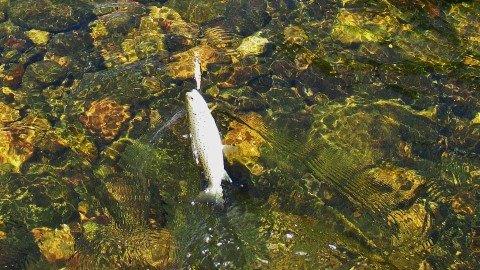 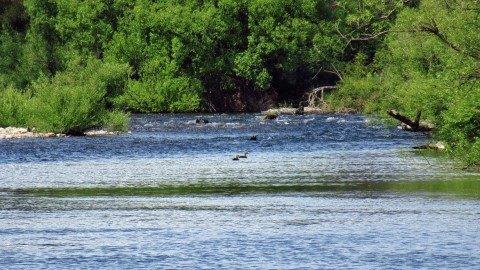 Some good fast water ahead