Another warm day was forecast with gusty Nth Easterlies again with a late change and a chance of rain and thunderstorms had me in two minds if I should go fishing this morning. I was awake at 4:00 am and just laid there listening to the radio before I got up at 6:30 am to get myself ready to head of to the upper Mersey River on private property. Once out of bed I was feeling very sore again from yesterdays late afternoon session in the river and the lower back & left hip weren't all that good. I decided I'd have a bit of breakfast and take a few pain killers then head off at around 7:30 am.

The area I'm heading is on private property and it involves a lengthy walk which includes some bush bashing up and down a fairly steep hill. So I'm hoping by the time I get there the tablets will have kicked in. I arrived just after 8:00 am and had ten minutes of bush bashing before I reached and open area where I had another five minute walk to the river. When I reached the river I flicked the little gold Aglia upstream and retrieved it at the same speed as the flow and soon had my first fish of the day on and soon in the net. It was a nice 430 gram brown.. After releasing that fish I crossed the river and headed off through several paddocks for around 1.5 kilometers before crossing the river again where I had another flick with the Aglia and picked up a small 290 gram rainbow. I then had to walk over a rocky stretch for another five or so minutes where I finally hopped in the river to start my day chasing trout.

The river was running at a good wading height and very clear, the water I've started off in is a wide deep run & I started off using a ghost brown hard body lure. I did have have several follows but there wasn't any aggression from the trout at all. I tried several different hard body lures for around thirty minutes, all with the same result. I had finished with this deeper run and moved into the fast water runs which I always love to fish. With the warmer weather and clear water the fast water runs always fish pretty good, well they do for me any way. It was back to the Aglia spinner, this time I went for the black blade given the the sun was fully on the water now. The first fast water run I fished gave up two nice medium size rainbows with the next run going much better giving up three rainbows and four browns.

I had come to the end of the fast water runs for now as I reached a very long, wide shallow to medium depth water and with it being so clear it was like looking into a fish aquarium. I could see quite a few browns sitting close to the river bottom, actually it was their shadow on the river bottom that gave them away. I went back to the hard body lures to see if I could entice one to have a crack at a lure but they weren't one bit interested, in fact most darted off at the site of the small hard body lure as I retrieved it.

So I bypassed that long stretch of river and fished three more fast water runs with the little black Aglia before I called it a day. Those three fast water runs gave up another three browns and six rainbows from eleven hook ups which made for a good ending to what was a tough day really.. Even though I caught & released 19 trout over a three & a half hour stint in the river it was still tough going. The trout had to be enticed into taking the spinner and each fish was well deserved, not only that the river bottom is very testing on the body too. A river bottom covered with algae covered rocks of all shapes and sizes that roll under foot is what makes it such a tough day and takes it's toll on the body. Now with the spin session finished I still had to walk across an open field for another five minutes then had that rotten bush bashing hill to get up before I reached the car. Tomorrow will be a rest day that I am sure of..

Tough way to have to get to the river 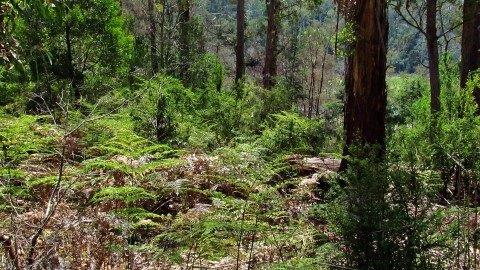 First of the morning caught here 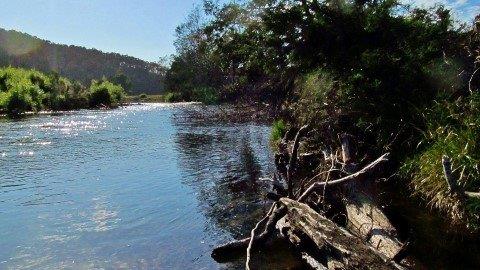 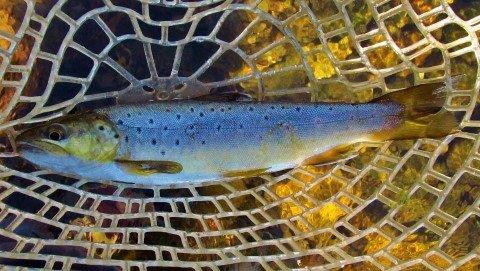 Caddis moths out and about 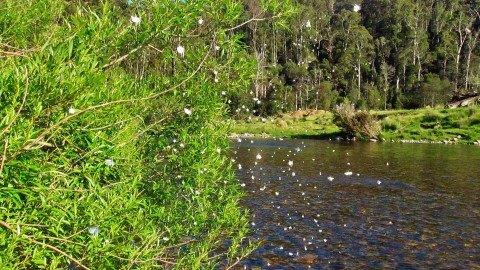 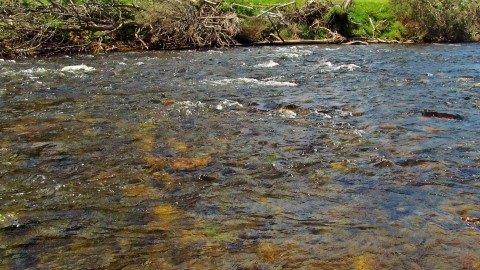 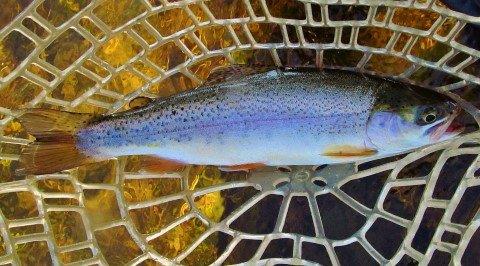 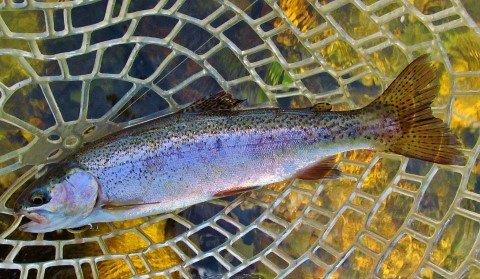