Clear skies, light to moderate WSW wind and a maximum temperature of around nineteen degrees forecast had me heading over to the Mersey River for a spin session today. I didn't hit the river until 10:00 am or there about and it wasn't all that long before I had my first brown take the little Daiwa ghost brown hard body. I plucked it out of a nice clear medium flowing section of water and it was quite a nice well conditioned fish too. It had taken the lure a little deep in the mouth to what I would have liked and there was a little blood flowing through the gills. Once I picked it up and checked inside its mouth I could see there wasn't any major damage to the fish, once I removed the treble hook with the forceps the bleeding had almost stopped. I held it in the water for several minutes and there wasn't any sign of blood coming from the fish, so I sent it on it's way.

The next stretch was a fast flowing run and I had a hit and miss there before moving onto a very long and wide stretch of river where I could see several small browns jumping. The air was reasonably warm and there were quite a lot of duns hovering above the water and that's what those little browns were after. I had several casts into the area where the trout where jumping but no takers. I did have plenty of follows from some interested trout including one very nice brown that would have been around a kilo. There was not a sign of aggression from any of those browns at all. I kept on casting and retrieving the little ghost brown lure in the hope there may be one trout out there that would have a crack at it, but there wasn't. It was time to try another lure and this time I put on a new Daiwa Yogiri bleeding tiger hard body, one of two that I bought a couple of weeks ago and had yet to try in the rivers.

I moved a little further (approx 20 meters) upstream from where I had been fishing and started flicking the little lure up and across the river, within two or three casts I had a taker. It was another nice brown that made several runs and leaps from the river before I had it in the net. After releasing the fish I continued on slowly working my way up the river and picked up two more well conditioned browns in pretty quick time. It's amazing what a change of lure colour can do some times. With four trout caught and released the day was going along quite nicely at this stage, I'm hoping it will continue to do so for a little longer. I wasn't expecting to much really with the sun fully on the glassy clear water but I felt I still may manage one or two more before I'll be calling it a day.

I had only moved on for around ten meters when I cast the lure close to a fallen tree in the river, within three turns of the reel the lure was taken hard and fast by a very solid fish. It actually took me by surprise too because I wasn't expecting such an aggressive take at all. As soon as that fish took the lure the little reel screamed as this solid trout took off, it was then I knew this was a large brown. I soon spotted it in the clear water and immediately took a deep breath when I saw the size of it. In saying that, I could see it was going to test out the thin four pound mono I'm using as well as testing out the new little Daiwa Revros 2004H reel that I'm using for the first time today. Patience, that's what it's all about I kept saying to myself. Just leave the reel tension as is and let this fish do all the work and tire itself out, that's all I have to do.

The light weight Daiwa Presso rod certainly was being tested as well, my adrenalin was running pretty high at the same time. This brown made two more leaps from the river before it slowly tired and I eased it into the net. I was a little worried when I was leading it into the net because I only had my small shallow net with me, but once in the net it just laid there, it was exhausted. I quickly weighed it while it was still in the net it went 1.58 kg after I deducted the 310 grams of the net from the total weight. After a couple of photos I soon had it in the river and released it once it was good enough to swim away on it's own. I didn't care if I never caught another trout for the rest of the session as this one just made for a perfect day in the river.

Another brown caught on a Bleeding tiger lure. Mersey River 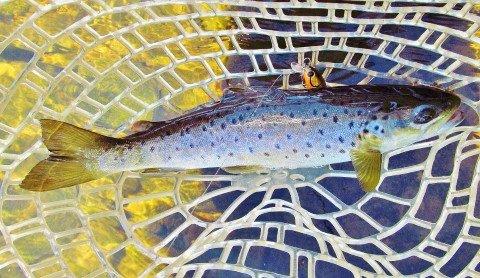 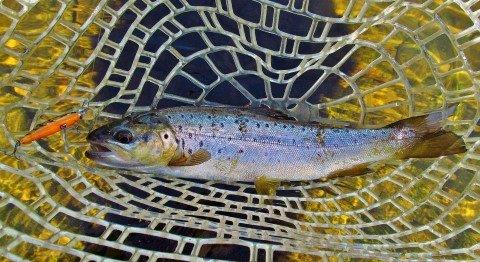 First and only rainbow trout of the day Mersey River 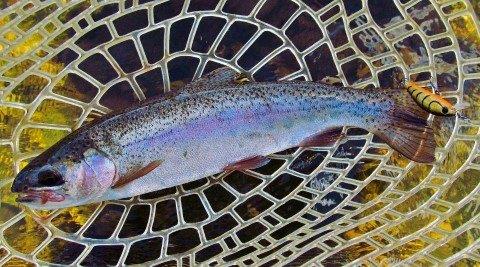 My best brown of the season 1 58 kg. Mersey River 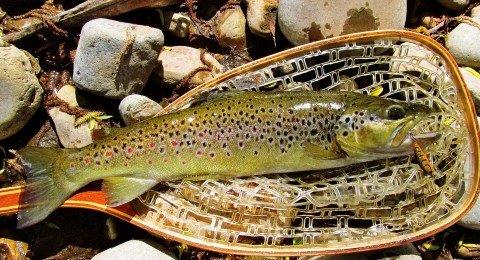 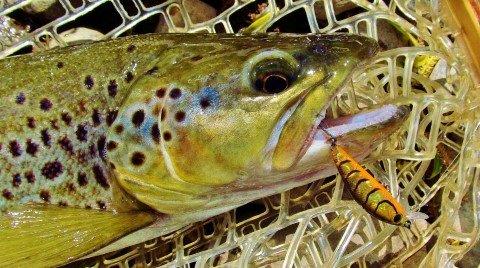