Another warm day had me heading over to the Mersey River for a few hours chasing trout.. I didn't hit the river until 10:20 am not that it mattered all that much as it was mainly overcast conditions for now. The river here was running at a medium height and fairly clear so I'm hoping to catch and release a few browns today given the conditions were just right. I started of with the Daiwa ghost brown seeing as it worked well on the browns up at Liena yesterday in what was pretty tough fishing conditions. Well the first couple of stretches of water were very quiet, though I did manage to have a follow from a very small brown. It wasn't until I was half through fishing a back water when I finally caught my first small (270 gram) brown for the morning. That was the only brown taken in that long back water run, I did have several follows without any signs of aggression at all from them.

I headed back into the main stream and started working a long & wide 600mm deep stretch of medium flowing water. I stayed in the middle of the river and worked the lure down both sides of the river and that's when I picked up three nice browns in five minutes, all of them from the right hand side of the river. After catching and releasing those three browns it was all quiet again until I reached the top end of the next stretch of river forty minutes later. It was there I caught another three browns, one of them being the best brown so far (550 grams) and was taken in 300mms of water close to the right river bank. After that I had several browns follow the lure but they had gone off the take again. Talk about them being on and off, still it's good when they're on, much better than them being off all through the spin session.

I was about to call it a day when I thought I would try another stretch of river some four hundred meters further upstream, a stretch of river that has given up a few browns in it's day. I bypassed a long stretch of slow/medium flowing river then re-entered the river, I had also changed over to a Rapala F3 gold/black hard body lure. It didn't take very long at all before I had a brown take the lure, this was another solid brown that peeled quite a bit off line from the spool as it made a couple of hard runs with the flow.

Twice I nearly had this fish in the net and both times he made that dash for freedom, rolling several times and wrapping the light 4lb mono line around itself. Then it came to the surface flapping around and I was certain this would see the line part ways which can happen from time to time when they wrap the line around themselves. Then it rolled in the opposite direction and unwound itself, it had also tired so I slowly led it into the net. This was the best fish so far beating the other brown by 30 grams. Two casts later I picked up another brown, this was just a small 280 gram fish which I didn't bother photographing. One more cast towards the river bank and I had another solid brown take the lure, after a bit of a tussle it was soon in the net. This fish was a little smaller than the other two and went 530 grams, a quick photo and it was soon on it's way. I fished on for another half and hour and never sighted a fish so called it a day at 1:15 pm. Funny, after catching the first small brown they came in three lots of three all being caught in quick time. The trout were certainly on and off in the Mersey River today.. I'm just glad they had a few ons and not all off's.. 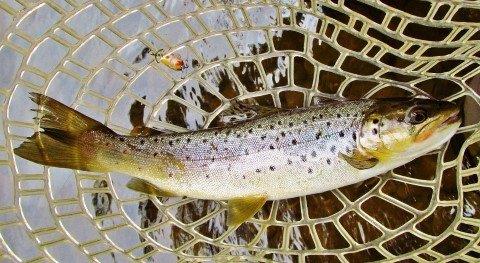 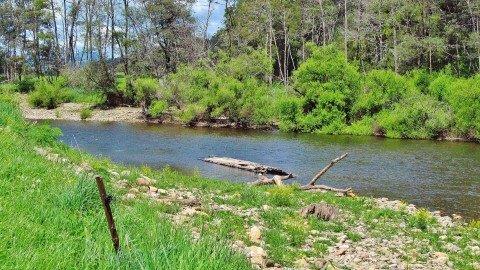 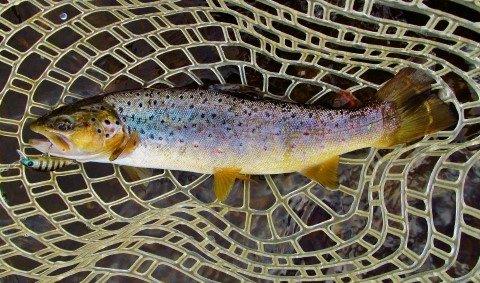 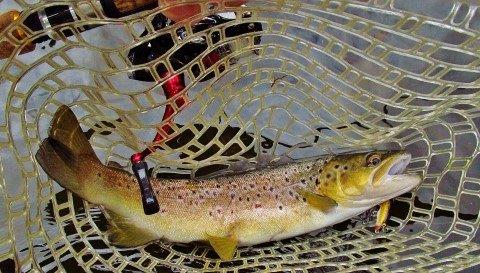 Solid brown taken from near the river bank Mersey River 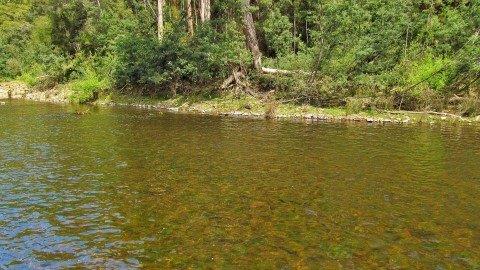 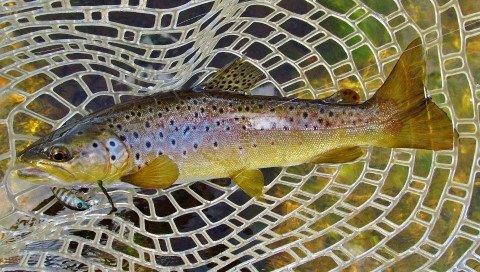