Well at last I had a day when I managed to be on the water by 9.00am in what was absolutely beautiful conditions. The Mersey River was much lower up at Weegena than my last trip four days ago, it was also crystal clear. There were quite a few large browns surface feeding in several slow flowing sections of the river too. These fish were all in the 1.5kg – 2.5kg range which was nice to see as there's been plenty of little browns around of late. I started of flicking the black fury (1.5gm) into the shaded areas along the opposite river bank and managed to get a few follows from some decent sized browns, but not one hit to go with it. It's always going to be tough getting into a few browns when you see others surface feeding, this is when I will often pick them up in the fast water runs.

A quick change to a small 30mm dip minnow lure in the hope this little brown trout pattern hard body may just be what is needed to get a strike. On the third cast to the shaded river bank that I was working I did have a follow from a large brown that just nudged the back of the lure with it's snout then slowly turned and moved off. Talk about frustrating, I thought that brown was going to take it for sure. I stuck with this little minnow lure for another twenty minutes slowly working my way upstream for just a few more follows. Trout were still sipping small midges off the surface all this time.. Perfect day for the fly fisher really.

Another change of lure and this time it was the Rapala F-3 rainbow that went on. Well the same thing kept on happening, follow after follow was all I could manage. I was really getting frustrated with them now so it was another change of lure. Surely there's one lure I have that one trout will have a crack at. This time it was on with a 6cm slim rainbow trout minnow lure in the hope that this one will stir up a brown. These lures have a great action too and have saved the day a few times for me. The second cast the lure was hit hard and fast by a nice solid brown that immediately leapt from the water. This was a fish of around 2kgs plus, I knew I had a fight on my hands with this brown. It made five or six solid runs with several leaps from the river during those runs. Once I had it in closer I could see it had wrapped the line around the lure which was a worry. Then with one more run and a head shake it was gone and so was the lure. This is what I was worried about happening. With the 4lb mono wrapped around the fish and the lure the line had got between the lure and the treble hooks and that always spells trouble with fine mono line. After finally coming up with the right lure to get one of these solid browns hooked only to lose it like I did was disappointing that's for sure. But that's the way it goes with any type of fishing be it fresh or salt water.

I was now into a 200 meter stretch of fast water so it was back on with the (1.5gm) black fury once again as this lure always fishes well in shallow fast water runs. Within four casts I had my first brown hooked and soon in the net. This wasn't a big fish, but it was a well conditioned 420gm brown and the first of the day which was a relief. I picked up another two smaller browns over the next thirty meters of fast water from four hook ups which wasn't too bad. I had some thirty meters of fast water to fish before I was calling it a day as the sun was full on the river. There was a small Waratah next to the river and it was shading a small area close to the river bank, I flicked the little spinner just ahead of the shaded area and let it drift back with the flow while slowing retrieving any slack in the line. Once the spinner drifted into the shaded area it was taken by a large brown, not quite as large as the one I had previously lost, but it was still a good fish. This fish decided to make a dash for it downstream and it just peeled the line from the spool with ease and there wasn't a thing I could do to stop it. Light line and a large fish in fast water which has a rocky and slippery bottom is a recipe for disaster. It had taken close on thirty meters of line before it turned and headed across the river, then it turned again, this time it decided to head back upstream and I gained some line back on the spool. It made one leap from the river and that's when I could see it was a fat brown of around 1.5kgs. Suddenly it turned and darted of downstream again, this time it wasn't stopping. Then it happened, it was gone!! At first I thought the line had snapped at the knot as that's normally where it breaks. But when I wound it back in I could still feel the weight of the little spinner and anti-kink in the water. Once in I saw the damage, the little black fury was totally destroyed. The wire shaft was bent, one hook on the treble had been straightened and another completely gone. It was then I decided enough was enough and called it a day, one of frustration and disappointment. It was one of those days we fishermen often call "" A Day That Could Have Been.''.. Oh well, there's always another day isn't there.. 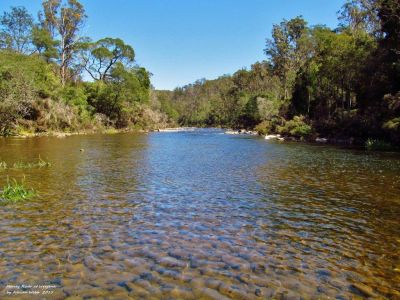 Too bright for fishing Mersey River 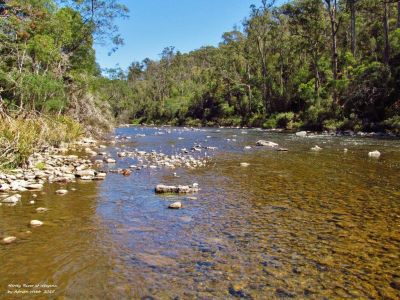 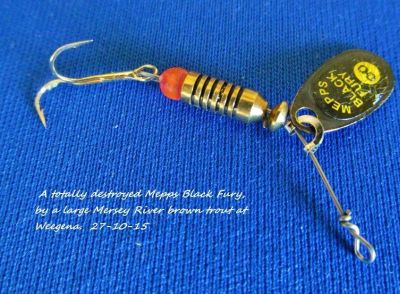