Mainly overcast conditions plus a forecast with the chance of a shower or two I decided I would try a section of river at Weegena that I haven't fished for close on twelve years. The reason I haven't been near it is because I had completely forgotten about it. Once there I soon remembered why I had wiped it from my mind, it is one of the toughest sections that the Mersey River can throw at you. It is very rocky and always as slippery as an ice skating rink. It was no different today either, as soon as I hit the river it all came back to me.. The last time I fished here I went in for three dives during that session up here. Back then I only had the old waders with the rubber soled boots and they're a death trap in any river that's rocky and slippery. But today is another day, besides I now have the proper wading gear with the Korkers spiked felt soled wading boots, it wasn't going to be as bad as twelve years ago.

The river hadn't changed one little bit, it was still as slippery as ever and the rocky river bottom, well it was still as bad as ever. I started off with the same little black fury spinner that's been used for several trips now and is starting to look a little worse for wear. Still it's caught around 40 or more trout since new so it's done it's job that's for sure. The first three casts did get the attention of a couple of browns which resulted in one hit and a miss. After that it all went quiet so I thought I would try a small 30mm Dip Minnow in a brown trout pattern. I picked two of these little lures up at the Inland Fisheries weekend at Great Lake at the end of last season. Two for five dollars which I thought was pretty well priced. Now to see if they work!! It did, on the third cast it was taken by a nice solid rainbow that decided to do a river dance by leaping and tailing all over the place. I was now worried that this little lure might fall to pieces because this rainbow was a really good size and the trebles on the little minnow are only a size 14. It did hold together and I finally slipped the net under the "bow, it was then the lure popped from the trout's mouth. The lure was certainly value for money that's for sure. The rainbow tipped the scales at 550 gms and was released no worse for wear, just a little less vigorous before it was caught. The very next cast another rainbow took the minnow, this fish wasn't as large as the last fish, but it was still a solid "bow. It wasn't long before I had it in the net, another nice well conditioned wild rainbow that went 390 gms. I did have one more hit and miss before moving on to the next stretch of river. 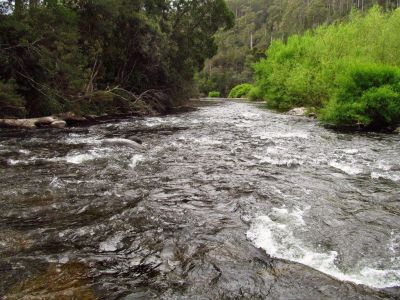 This stretch was a long wide slower flowing piece of water of various depths. I stuck with the little minnow for close on ten minutes without a sign of a trout. The cloud had now started to break up and there was more sun on the water now so I changed back to the little black fury. This was a good decision as I did pick up another rainbow and a small brown with it. I only had one more follow before I decided to get out of this long stretch of river and head on up to the next fast water run. It wasn't long before I had another solid rainbow on, then another another, three rainbows from the one small piece of fast water in such a short time. These were all nice fish all around the same size as the 390gm one caught earlier. Ahead of me now was another couple of fast water runs and these gave up four more rainbows & one small (250gm) brown from six hook ups. These fish were all around the same size as I had caught and released earlier. I had now reached the end of the fast water here and in front of me was a very long, wide, deep stretch of water, this is when I decided to finish up here and head on over to another area on the Mersey River. In three hours fishing here I had caught and released nine rainbows and two small browns from thirteen hook ups and several hit and misses. So it was worth coming back after such a long time, and I will make a return trip again very soon. The odd thing was that there wasn't too many signs of brown trout today, quite the opposite to yesterday's trip. 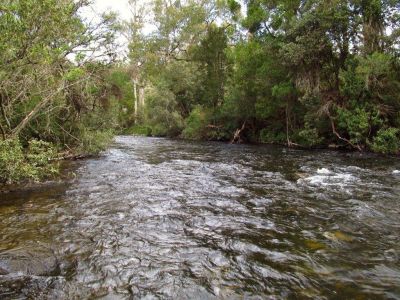 After a two kilometre drive I was now at the other stretch of the Mersey that I wanted to fish before heading back to Sheffield. This was a fast water run of some three hundred meters and is always worth a fish when I'm up this way. This run is a little deeper than the others so I used the rainbow Rapala here. It wasn't until I had fished at least half the distance of this fast water when I picked up rainbow number ten. Another "bow close to the same size as all of the others. It then took me up to the last last forty metres before I hooked and lost another rainbow, then two casts later I picked up my last rainbow of the day. I had reached the end of the fast water run, that's where my day ended, a good one it was. In well over four hours of spin fishing today I had finished up with eleven rainbows and two browns which takes my seasons total to 134 trout for the season of which only six have been kept. Oh! I have also retired that little black fury too...
cheers