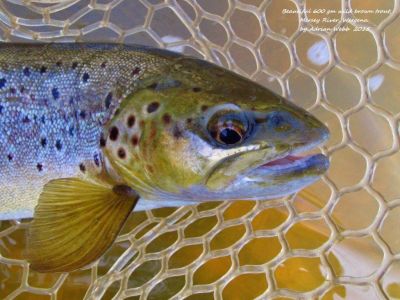 Another top day weather wise today had me heading on up to Weegena to give the Mersey River a fish. The wind was switching from the Sth.West to the Nth West and back again so this wasn't going to be a problem either as where I was fishing it's reasonably sheltered in most places on the river. The area I'm fishing is on private property and there's a 2.0km walk before I get to my starting point in the river, but it's always worth the walk. The fishing here is normally quite good most times and there's rarely a trip here that I don't miss on catching a few browns & rainbows.

Finally after a leisurely walk through native bush and paddocks I was at the river which I found was running some three to four inches higher that I expected and it was also very cloudy as well. I forgot that we had thunderstorms and some heavy rain in this area two nights ago, but it was still safe enough to wade. It just meant that it was going to that much harder pushing my way upstream in the deeper and fast water water. This combined with the rocky and slippery river bottom means I'm in for a tough three hours or so in the river. As usual I started off with the little black fury spinner and had a hit and miss on the third retrieve which was a good sign. I didn't mind the water being on the cloudy side as the river was in full sun as it was now 1.30 in the afternoon. This always helps with the fishing when it's like this as the trout don't actually spot the lure straight away they go on the vibrating sound of it in the water. Most times they'll hit it straight away too, where as in clear water they often come at it and then turn away at the last second.

I kept on flicking the spinner around for another five to ten minutes as I slowly worked my way upstream slipping and sliding on the rocky river bottom. Hell, I'm already feeling a little knackered and I haven't been here that long either. It's definitely going to be a tough session for sure and I know tomorrow will definitely be a rest day for this old fart. I was now coming into a deeper section on this long stretch of water, this meant for a change of lure, it was on with the F-3 rainbow pattern Rapala.

I had moved further out into the deeper water (approx 70-80 cms) to get clear of the water weeds that were fouling the lure. A few cast later I had my first fish take the Rapala, it was a nice brown, but I felt this fish was suicidal as it made around six leaps from the water heading straight for me and into the landing net. This had to be one of the quickest moments I've ever had in getting a trout to the net, it took all of ten seconds I reckon. This brown wasn't a real small fish either as it went 500 gms.

After releasing it I checked my line for any wear and tear in the lower meter of line to the lure and decided I should snip it off as it was looking a little worse for wear. It something I normally do after each trip but I forgot to do it after the last one. The last thing you need is to have a decent size fish go off with one of your favourite lures in it's mouth. I was soon back into the swing of things flicking the lure around when I was onto another nice brown, much bigger than the last fish too. This one wasn't suicidal as it gave me merry hell by making at least eight leaps for freedom, then making several runs out towards the fast water, upstream then back downstream before it finally ran out of puff and I led it to the net.

Then the same thing happened as it did a couple of days ago, once this brown was in the net out popped the lure from it's mouth. Now this doesn't happen that often to me when trout fishing and to have this bit of luck in the last couple of trips is great. Whether it keeps up is another thing! After reviving this solid 600gm brown it was back into the river as good as it was when it took the lure. I spent another five minutes fishing this last twenty meters of river before reaching a long 500 meter run of fast water. I only had one more hit and miss in it.

I was now in the fast water which was much deeper than I normally push my way upstream in because it knocks me around too much now days. I decided to stick to it though as I felt it would be holding quite a few fish. I always use the blade spinners in fast water but with it having the extra depth in it I decided to stick with the Rapala. This was a big mistake as over fifty meters of river I had hooked and lost 8 trout. It was now time (should have been much earlier) to go back to the little mepps black fury. Good decision too as it wasn't long before I had a nice medium size rainbow take it, a little further up and I had another brown in the net. Boy, I could have kicked myself for not putting this spinner on at the start of this fast water run. The next and last hundred meters that I fished before calling it a day I picked up another two rainbows and lost three other fish, one that was around the 800 gm mark. It was a very solid brown that straightened one treble hook and broke another off. A fish of this size on light tackle in fast water is like having a three kilo fish take the spinner in slow flowing water I reckon. This fish peeled off a heap of line and just when I thought I had it beaten it made another run and it was gone.

Still it was a great and tough three hours spent on the river today, a day "'What Could Have Been'" a lot better fish count had they all stayed on. But that's trout fishing and that's what I love about it. 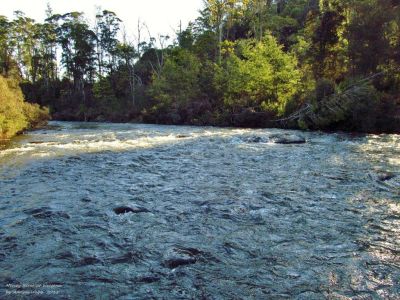 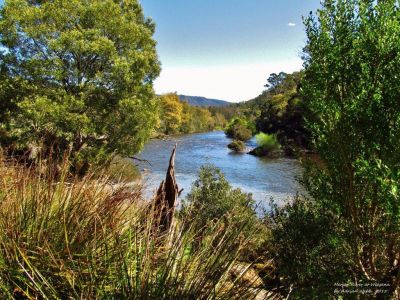