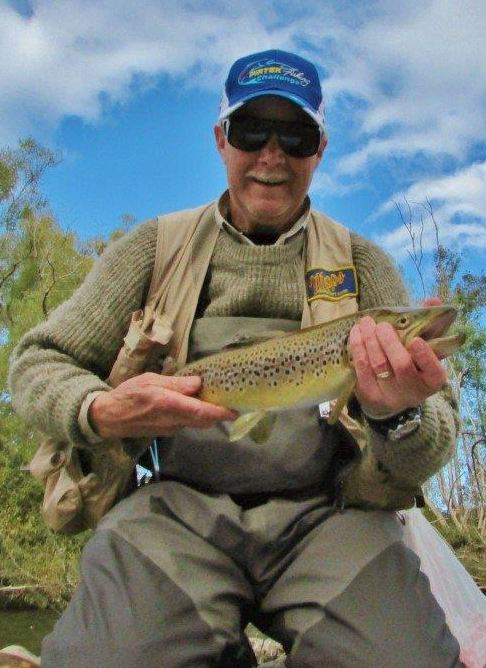 What a top morning it was for the start of the Pirtek Challenge, well it was here in Sheffield at 7.00am. It was almost calm with just a light to medium cloud cover as I left for Merseylea for my stint of fishing in the hope of picking up a decent size brown for the Pirtek Challenge. I wasn't expecting any thing over big even though I did spot a few very big browns surface feeding on hoppers the other day on a nice long and deep section of the Mersey River. That was my reason for going and catching the hoppers last Friday as they are what I was intending to use today.
Well as I was getting close to Merseylea I noticed it was looking a little on the windy side and this wasn't what I wanted this morning at all. Once at Mersylea the wind was reasonably strong and so I decided I would spin fish my way upstream until I reached the area where I spotted the trout feeding last week. One good thing was that the river level was a few inches higher from the good 25mm -30mm of rain we had on Friday night. This was much needed and it will be all the better for fishing too. I started off with a Rapala F-3 rainbow pattern and used that over the first one hundred metres and picked up my first fish for the session. This was a nice solid (450gm) brown that once landed was quickly placed on the Pirtek brag mat, photographed and then released.
This was a good start to the session, but I'm still hoping for bigger and better size fish later on once I get to use the hoppers on the water.
The next couple of sections didn't do all that well with only the one hit and miss and a follow from a medium size brown. I decided to change lures and put on a Mepps #00 Black Fury (black blade) to see if it could help me catch a few more browns and hopefully something a little bigger.
After a few casts in a medium stretch of fast water I hooked into a plump rainbow that made several runs before it tossed the spinner. Now this didn't bother me that much today as it's browns that are the specified fish for today's Challenge. I cast the little Mepps across into a small piece of flat water (very small eddy) on opposite river bank at the edge of the fast water. These small flat waters often hold fish and this one was holding one too. As the spinner hit the water I had an instants hit from a trout but it missed getting hooked, so as I let the lure drift with the flow there was a small brown following with it's nose right on the trebles, then it happened!!  A massive brown came charging in from behind this small fish, which then darted off and this large brown just smashed the black fury in one very rapid and aggressive attack. Yes, Yes, Yes!! I'm on, and now my hearts in my mouth because now I'm terrified of losing this big brown. A fish that may, with a bit of luck at least give me a chance of a prize in the Pirtek Challenge. It made several runs back and forth across the fast water and I could see the blade of the black fury spinner fluttering from the side of it's mouth. Now I'm thinking, how well is this brown hooked? Will one more head shake toss the little Mepps and I'll lose it.
Now I'm talking to myself, just be patient and keep the tension on him, but not too much as to pull the black fury from it mouth. I don't know how long I had this fish on for, but it seemed like an eternity. Finally, he slowly tired and I managed to lead him into a calm section of water next to the river bank and I slowly slipped the net under this beautiful big brown. What a relief it was to see this fish in the net at last. I don't know who was most exhausted in the end,me or the fish! Then came the part of getting it to stay still on the slippery Pirtek brag mat so I could photograph it. I was in luck as he just laid there for me to take couple of photos. I only took a couple minutes in the water with him before he was okay and on his way once again. This fish measured 560mms and tipped the scales at 1.6kgs which is the second biggest brown that I've caught in the Mersey River. My best being a brown of 2.2 kgs some eight years ago and that too was taken on a small Mepps #00 Black Fury spinner.
Now I didn't care if I caught another fish at all, unless it was bigger than the one just caught and released. I changed lures once more as the little black fury was wrecked from that brown, so I went back to the rainbow Rapala and picked up another two browns with the best going 550gms. I had now reached the long slow water section that  I was going to fish with the hoppers. The wind was just howling across the river and so I decided I'm  not going to bother fishing with them in these conditions. So I let them all go and headed back to the "'Trout Stalker 2'" and back home quite satisfied to how the morning went.
Cheers
Adrian 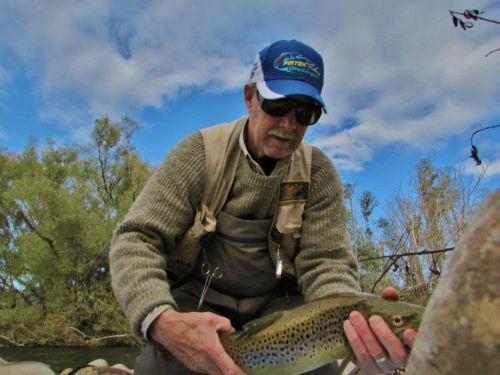