ONLY  TWO  BROWNS  FROM  SEVEN  HOOK UPS.
Cloudy, humid conditions today made for a run over to Merseylea for a couple of hours in the Mersey River in the hope of picking up a trout or two. The river was still running low and clear and the rocky river bottom was just as slippery here like it was further upstream at Kimberley last Friday. I did see the odd fish jumping which was good, as it was a sign that there were a few trout about and so I might be in luck today.
I started working the rainbow Rapala F3 in a slow section of river that was around two hundred meters in length and had a nice deep run along the willows on one side of the river. When I had fished and reached the end of this stretch of water I was feeling pretty disappointed because I did not have a single hit or even a follow. The next stretch was a faster piece of river and this too had a good run of water along the willows, and so I started working that area.  This fast water was probably close on fifty meters in length and it did produce four hook ups from some nice solid browns.  There was only one problem though, I lost every one of them. They were all aggressive attacks on the lure too, but they just didn't stay hooked. Each fish made a couple of runs and leaps before throwing the lure every time. Now I was really feeling ticked off as this is just not on, and surely it's going to turn around in my favour soon.
Oh well, it was onto the next stretch of river that was a little wider and deeper. The second cast upstream and I had an instant hook up, but it too was gone as quick as it took the lure. This can't be happening I thought as I have a lure on that has two sets of trebles on it and these fish are just not staying on. I decided to change to a Rapala F3 in a brown trout pattern to see if this may make a difference to having a fish staying on. The very first cast with it and I had another brown take the lure and this one made it to the net. Yahoo! At last one made it to the net. When I looked in the net to release the lure from the fish it had already popped away from the fish. Photographed the brown and sent it on it's way without even having to handle it.
I was thinking of calling it a day but decided to try a small section of fast water that was divided from the main stream and ran along under the willows. This small fast water was only 6-8 feet wide and so I flicked the Rapala up and under a willow and let it drift with the flow and it was quickly taken by a nice solid  (610gm) brown. It wasn't long and this beautiful golden flanked brown was in the net, and it too tossed the lure as soon as it was netted. Lady Luck had finally showed up and given me a hand. The colours of this fish were just unreal with its deep golden coloured body and bright red spots made it all worth while having a go in this small run of fast water. After a quick photo it too was released.
I was now at the top end of this small run, I cast into it and had a medium sized brown take the lure. Well, Lady Luck had left me already as this fish managed to toss the lure too and so that was it for me, I called it quits. I had fished for just on two and a half hours in what was a frustrating session in some ways, but still a rewarding one in another. I did have enough hook ups to keep the session interesting, and had they all stayed on this article would have had a very different title.
Cheers
Adrian 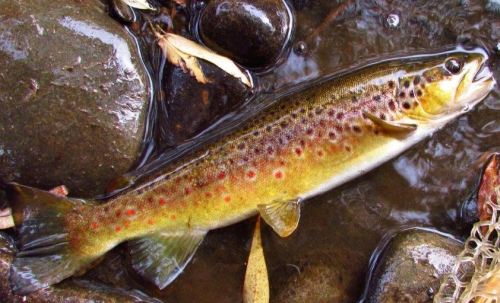 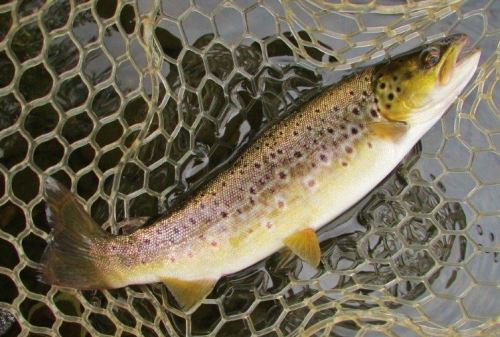