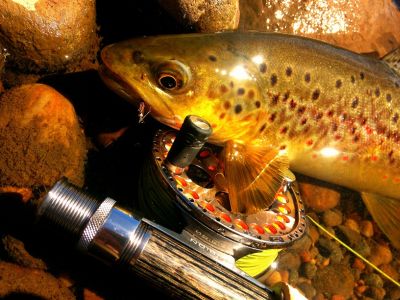 A couple of weeks ago I was taken to the magical Mersey river by Daniel Brandenburg
In the 25 odd years I have been angling I have never once stepped foot into this system.
The plan was to fish a different part of the river, but after getting the "good oil" from a local Mersey River guru late Saturday night on where the best Caenid hatches have been, it was clear we was heading to a different area, which went something like this......

I met up with Daniel early Sunday morning and off we set. upon arrival at out first section of the river we came across our first hatch of Caenids which was absolutley massive and some almost formed cloud like halo's over the bubbling river. I was very excited! Unfortunately two other anglers had beat us to this first "drop-in" so we headed down to another area to try our luck...... No more than 10 minutes down the road we were into the next section of river (which we had to ourself) and ready to see what the day would bring for us. The hatch was considerably small further down stream and only the odd "oncer" was coming to the surface so I changed from the single dry rig and prepared a tandem rig consisting of a #16 Stimulator and a #16 Pheasant Tail Flashback Nymph which I stayed with for the entire day as it seemed to be the most effective.

After missing a few short takes on the Nymph I finally got one to stick as the Stimulator was ripped under the surface by my first fat little Mersey Brown Trout..... We continued on for another 100 yards or so and picked up a few more smaller fish and I dropped one that came up and inhaled the Stimulator in a small backwater, but this fat Gold nugget of a couple of pounds won it's freedom as it spat the hook whilst going nuts on the surface!

After Daniel mentioned it seem pretty quiet in this section than usual, we made the call to move further back up the system for a look. At our next location and no sooner we had made it to the river bank there was a very solid fish of 3.5+lb right under our noses. I swiftly covered the fish with my tandem rig, it ate the nymph, I struck and had weight, then gone! My heart sank as the fish exploded on the surface even after the hook had pulled and we watched it race to the other side of the river to have a sook.... I'll get him next time I thought to myself! Once I got composed after dropping this fish and snapping another nice one off, I finally managed to grass a reasonable fish that went mad on the 3wt and pushed my 7X tippet to the max when he found the faster current of the river.

Continued landing and dropping a few more smaller fish, I came across another very solid fish stationed under a willow tree mopping up the odd spent Caenid as they floated down stream. I showed 5 boxes of flies to this fish and it wouldn't have a bar of anything.... even ate a natural that was 2 inches beside my #18 Adams just rub salt into the wounds! I noticed another fish on the opposite bank and slowly waded across the river like a sly old Cat to see if I could fool this one and I did... second drift of the rig and it hammered the nymph and knew where every snag in the river was as it had the 3wt buckled over in a world of pain! As the day was wearing on, we moved to one last section of river before we had to be back in town as Daniel mentioned his girlfriend doesn't let him stay out after a certain hour!

So that was my first trip to the Mersey and I sure was not going to be the last!

A few days later, Daniel and I headed back out for another look.

This session was mainly for Daniel to have his first go at fly fishing.... no spin rod to be seen! :D
We decided to head to a more open and wider stretch that would make it easier for Daniel to learn. We arrived at 6:30am, donned the waders and entered the river. After spending a bit of time going through casting techniques, do's and not to do's etc. we slowly made our way upstream. Along the slower edge of the river there were trout feeding hard on Caenids which I managed to hook a few of on a #18 Adams, most were only little fella's, but I'll never complain about seeing any fish come up and take a dry fly no matter what size it is! Inbetween landing a few fish I would quiet often pass on a few tips to Daniel who was working the faster with his Nymph and everything I told him he listened to, took in, put it into practise and his casting was improving every hour.

I ventured over to a small canal type run that flows around the back of a narrow rocky island and found a good fish poking it's snout out and sucking in Caenids about every 5 seconds. I covered this fish with my small dry and it got eaten as soon as I hit the right place as the fly landed about 2 inches off the bank. I was too early on the strike and stuffed my chances with that fish...... So I thought anyway! I returned back to this fish after landing a couple more small fish from where I caught some previously that morning and luckily the fish was on the job again! I showed him the same fly, he ate it, I waited what felt like a week, strike and she's on.... After an awesome fight on the 3wt the fish was in my hand ready for a few quick photographs then of course released for another day.

Daniel continued on further up the system as I waded out to cover a few fish in the deeper runs that were rising here and there, but these ones couldn't be fooled, unfortunately. Once I met back up with him it was fantastic to see how much his fly casting was improving. As the hatch had died off, I went to the favourite tandem rig of mine and nailed on more little guy before we decided to head to another spot which I had not been to for a look.

It was obvious on arrival the fish were of a bigger average size, but less of them, which of course isn't a bad thing. We worked around 200 yards of this section and I had a good fish follow the Nymph down stream but spooked as he got a look at me (which must have scared the sh!t out of the poor thing) I hooked another good fish but lost this one as he bolted to the sticks. Daniel was beside me and put a roll cast into a run and he was ON..... Then off! The fish pulled the hook as it went for a run down stream. The big guy looked shattered. I said "Don't worry about it mate, it won't be the last one that gets away, just keep casting and get another" and that he did not long after we made another move to another area. No sooner we entered the water, Daniel put a very nice cast into a run that produced fish for me on our previous trip and a lovely fat little Brown Trout absolutely hammered his Nymph. I watched it all unfold as I was standing beside him and man did it feel great! The little guy was put back for next time and after a firm handshake and congrats we fished on a little further for nothing landed, just me dropping good fish, one of which was a really solid Rainbow.... not massive, but a fish I really wanted a photograph of...... But there's always next time.

Thanks again for a great day out Daniel and congrats again on your first of many fish on the fly. Well done mate!

Hope you all have a safe and merry Christmas and tightlines..... 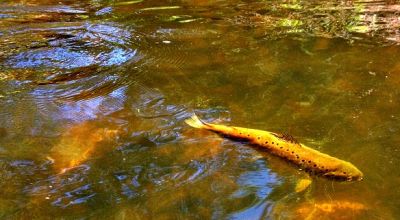 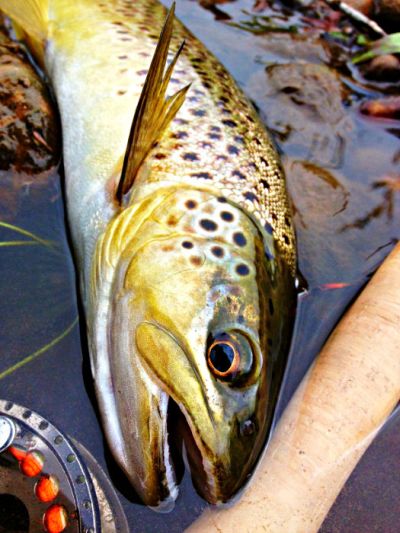