The Australian Fly Fishing Museum and Clarendon
Clarendon House is one of the most important properties of the National Trust (Tasmania). It was built by James Cox in the 1830s and is an architectural and heritage icon with many unique features. Situated in Tasmania’s northern Midlands, the western side of the property is flanked by the South Esk River and across the river can be seen Symmons Plains. What has this got to do with a fly fishing museum? Fly fishing in Australia is predominately fly fishing for trout and it was James Arndell Youl* from across the river at Symmons Plains who was primarily responsible for the successful acclimatisation of trout in the southern hemisphere.


After many attempts the first little trout hatched in Tasmania in 1864. The same James Youl had married Eliza Cox, sister of James Cox, at Clarendon in 1839 and this was an association that two keen fly fishers, Mike Stevens and Ron Dennis, had firmly in their minds when they were looking for a place to house a fly fishing museum. Discussions with the National Trust’s (Tasmania) managing director, Chris Tassell, progressed quite enthusiastically, and when accommodation for the museum was suggested in the shepherd’s cottage, the fate was sealed. Clarendon was now to become home for Australia’s first fly fishing museum.
Although there is a Museum of Trout Fishing at Plenty, near Hobart, this is all methods and trout fishing only. This project is certainly not about taking anything away from the Plenty museum, but more about building a relevant, outstanding and lasting legacy focussed on fly fishing in both fresh and saltwater in Australia.
Tasmania has a long and rich heritage of fly fishing and although trout were not the target it was in March 1833 that fly fishing was first mentioned in print in Australia. Thomas Richards published ‘A Day’s Fishing in the Plenty’ in the Hobart Town Magazine thirty years before the acclimatisation of trout. Richards writes about catching mullet on a ‘red hackle’ or ‘fern fly’, but it is certain the fish were Australian grayling. He goes on to say they filled their baskets, stopped to lunch on ‘broiled fish, new potatoes, and bottled porter’ and then continued ‘to the river side, to renew our murderous sport, which we pursued with unrelenting vigour, till our baskets [would] positively contain no more’.
The first fly fishing was probably NSW in the 1820s, but as mentioned the first article was 1833.
R. H. Wigram came to Tasmania in 1921 and was a direct descendant of Money Wigram who donated space on the ship Norfolk which brought the first trout ova to successfully hatch in Tasmania. ‘Dick’ Wigram, as we all know, wrote several keenly sought and collectable books on fly fishing and he is just a small part of the history which will be captured at the Australian Fly Fishing Museum. 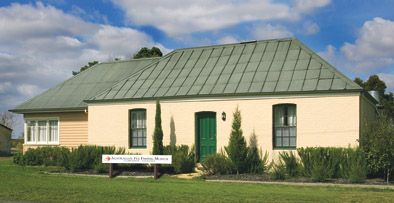 Why the National Trust is involved
Whilst Clarendon seemed like a perfect fit for somewhere to house a fly fishing museum there was much more. A strong acquisitions policy was important, as were charitable donations, grants, insurance, liabilities, curating, conservation, financial controls and more. Starting a museum from scratch and trying to ensure all necessary things were covered seemed impossible, but it was realised that the National Trust do all these things, and have successfully done so for many years. Most of the challenges were the same. After some soul searching it was realised that being part of the National Trust brought huge benefits and reinventing the wheel was not necessary. The museum was proposed to operate in a similar way to other ‘Friends of the National Trust’ groups. This gave control to the Australian Fly Fishing Museum committee, but with all the guidance, knowledge and benefits of the National Trust. The Trust covers all the on ground property costs, plus the committee’s costs for insurance, financial auditing, stationery, etc. and will provide the committee with its systems and protocols to run the museum. And that’s how the Australian Fly Fishing Museum will operate.
A committee was formed and includes: David Grisold, Tony Wright, Jennie Chapman, Michael Youl, Rex Hunt, Chris Tassell, Mike Stevens, Todd Lambert, Janet Lambert, Ron Dennis, Hugh Maltby, Greg Peart, Peter Boag and Stuart Cottrell.
The committee has developed a Strategic Plan, Action Plan and a Business Plan, brochures and more.
The Museum through the National Trust has been successful with a $25,000 grant and more than $240,000 of private money donated and pledged.
Acquisitions, restoration and display of museum pieces has also begun. The Museum Cottage is currently being painted and glass display cases have arrived.
An initial chronology of fly fishing’s important dates, events and people has been developed and from this an acquisitions and displays plan has been developed.
The museum is starting with a clean slate and this will allow something really special to take place where every display will be planned from the start, rather than put together from a haphazard collection of existing material.

*James Youl was born at Caddai, near Windsor, NSW, on 28 December 1810. He was called ‘Arndell’ after Thomas Arndell, assistant surgeon to the new settlement in Australia, who sailed with the First Fleet in 1787. James was at school in England when news reached him of his father’s death in 1827. He promptly assumed the position of head of the family at the property in Van Diemen’s Land that had been acquired from 1819. He was granted 500 acres of land at Symmons Plains in 1827. His male siblings also received similar land grants from the Crown. By 1828 James had purchased several other grants from the families of Bostock, Lucas, McNab, and Smith.
James was appointed JP (1837) and a magistrate, and was keenly interested in public affairs. He married Eliza Cox on 9 July 1839 at Clarendon, Evandale, Tasmania. Eliza was born 25 August 1817 at Richmond, NSW, the second daughter of Lieut William Cox (1789–1850) and Elizabeth Piper (1792–1872) of Hobartville, Richmond, NSW. William Cox Jnr, eldest son of William Cox Snr, is now best remembered for building the first road over the Blue Mountains. James and Eliza had five boys and eight girls. [From the Friends of the West Norwood Cemetery Newsletter, September 2008, by Bob Flanagan.] 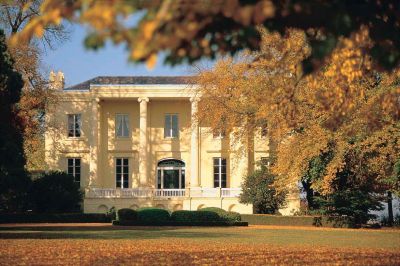