Presented from Issue 114, February 2015
Jamie Harris, like many anglers from the north west coast, is a fishing nut. And also like many Burnie and NW coasters he has spent many hours driving too and from the east coast chasing game fish. Whilst the nearby west coast has some great fishing it is often wild and unfishable. Bass Strait has some good mako and gummy fishing and Australian salmon and flathead as well. But recently another fish has arrived on the scene that is as good a game fish as there is, great to eat, tough to catch and now it seems readily available – yellowtail kingfish.

Jamie chased these as long ago as ten years, like many anglers, around Elephant Rock off St Helens. Elephant Rock was one of the first areas where kingfish were regularly caught. Clarke Island, below Cape Barren and Flinders Island was also a hot spot, but a lot of boat was needed to get there. So it was a bit elusive but that only hardens the resolve of keen anglers.

In the last ten years though there have been more and more reports of kingfish from around the state. King Island, Tamar and Derwent rivers, Great Oyster Bay, Port Sorell and Ulverstone have all become places to chase kingfish. So it seems for one reason or several Tasmania is experiencing an influx of another species that was once uncommon. Kingfish now join King George whiting as a premium fish and one that can be targeted – and caught.

Perhaps it is warming water that has encouraged the kingfish to move south, but almost certainly the banning of floating kingfish traps in NSW in 1996 made a huge difference. Progressively after this kingfish increased in numbers in lower NSW, then Port Phillip Bay and then jumped down to Tassie.

Tagging programs have shown widespread movements of kingfish from NSW to New Zealand and many large scale movements of more than 500 kilometres along coastal waters.

Yellowtail kingfish (Seriola Ialandi) are distributed throughout temperate waters of the Pacific and Indian oceans and in Australia from central WA to lower Queensland. Maximum age is thought to be around 21 and can grow to 190 centimetres and 70 kilograms. Females mature at around 83 centimetres and males around 47 centimetres.

Like many fish, the cooler the water the better the fish is as a table fish. Kingfish make great sashimi from cold water – and Tassie has plenty of that. Mike Stevens recently spoke with Jamie Harris and he revealed a few of his thoughts on kingfish.

The fishing grapevine was leaking stories about NW coast kingfish, so after some success at St Helens I decided to try closer to home. After seeing a few photos of good size Hoodlum (Kingfish) from around the Woolnorth area about four years ago, I decided that I had to get up there and get in on some of this action.

Kingfish love current, bommies (structure) and baitfish. From Smithton west there is plenty of shallow water with massive tidal flows and endless bommies, rocks and structure. This was the place to look. I must emphasise here it can also be very dangerous for the same reasons. Please take care especially when you have strong winds against tide. This causes very rough conditions and nothing is worth putting yourself and crew at risk. I won’t fish if conditions predict more than 10 knots of wind.

The places to start looking for kingfish are where the smaller baitfish regularly hangout. Baitfish hug the reefs, rocky outcrops and bommies and this is like a big berley pot for kingfish. Mix in some good current and that is even better. It is why Elephant Rock off St Helens was so good, and still is – plenty of baitfish.

For me the kingfish seem to bite best around two hours either side of high tide. The fish are still present and follow your lures, but they are not as keen. Initially I like to troll for kingfish to find them and that can be fast and with big lures. Even marlin size pushers are not too big. They are not shy and the bigger the bubble trail the better they like it. Seven or eight knots is not too fast will get the lures working at their best. You can run a bit slower using six to eight inch plastics and one to one and a half ounce jigheads. I like the minnow style rather than paddle tail plastics.

Casting with the big minnow plastics is very productive once you have found some fish and they often hit it on a fast drop. The paddle tails tend to hang up and drop more slowly and they are not as good. Kingfish like ‘fast’ When they are in the mood you will not be able to wind a lure fast enough to get it away from them and It is not uncommon to see 30-50 fish hooning around under the boat once a fish is hooked.

It doesn’t seem to matter what the lure is, as long as it is large, fast and erratic. If you can get a single fish fired up, then the whole school will go nuts. Jigging, surface lures or just a high speed erratic retrieve is the way to go.

The slow roll, constant retrieve will be mostly ignored. You must work the lure, wind as fast as you possibly can, Big sharp rod lifts and short pauses. Anything you can to add action will be a positive move. Get a big reel that has a high speed retrieve – and probably nothing smaller than a 6000 spinning reel will do.

I use 20lb or stronger braid and a 60lb mono leader and have still been getting smashed up and broken off regularly. It is important to have first rate gear and to be able to put the pressure on straight away.

Always be on the lookout for bait schools, either on the surface or on the sounder. Kingfish show up as bigger arches around the bait, so watch carefully and adjust your sounder to maximise your chances. Kings love a well presented livebait also and this is possibly the best way to fool a bigger fish. A live salmon, mackerel or squid held a couple of metres under a balloon will always fire up the sometimes fussy eaters.

Where to find kingfish

Any of the islands around the far NW Coast including Woolnorth and around Robins Island.

This area is well known for its run of Australian salmon, and if they, or mackerel are there, the kingfish will be close by – or even underneath them. The big eddies caused by strong current over a bommie is a favourite haunt and it doesn’t necessarily need to be deep. The kings will come into as shallow as two metres of water if their food is there and if you don’t have a boat you can still find a few hot spots. There are some good shore based options at Woolnorth although access to private land can be difficult unless your in the know. Water temperature can be a factor and on the NW coast it has been around 16 degrees, which seems to be a minimum to get them active. It is warming up now so I expect the kingfish to be around for at least two or three months.

As I explained earlier the conditions in this area with shallow water, fast tidal flow and strong winds can make for challenging boating. Don’t go out if strong winds are expected; tell people where you are going and what time you expect to be back; ensure you have more than enough safety gear and take two boats if you can. This is a developing fishery so enjoy it and only take what you need for a feed. 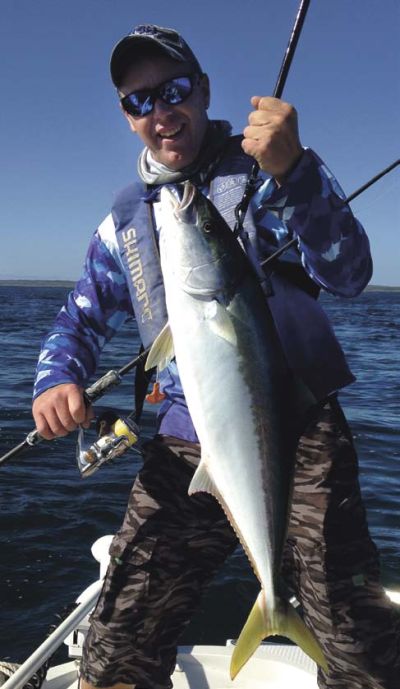 Just a small kingie to start the day. 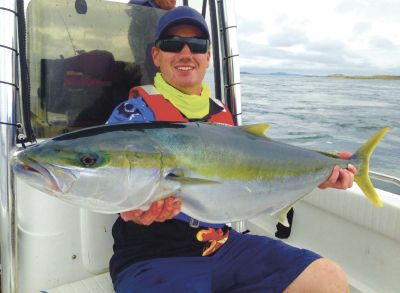 Just a couple of years back this size fish were a rare and unexpected catch.
Now they can be targeted, but make sure your gear is up to it. 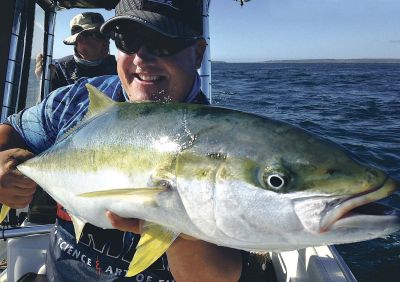 Just an average kingfish — and one of about 20 for the day. 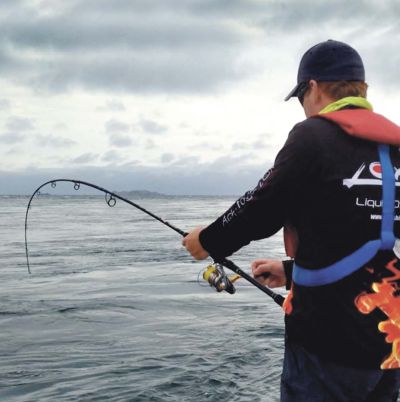 Even a 5000 size Shimano Stella can be a bit small.
Check out the current.