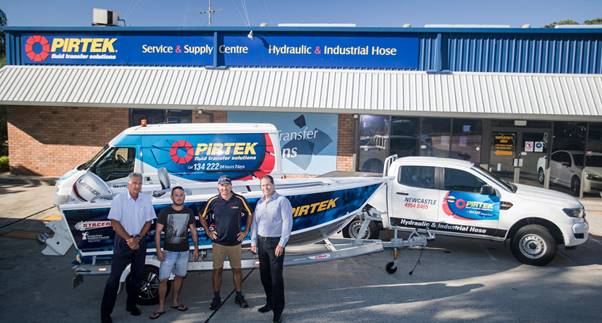 The tenth annual PIRTEK Fishing Challenge, which attracted almost 9000 participants, has been recognised as the world’s biggest competition for anglers.

With entrants from every Australian state and territory, the event also raised funds and awareness for Prostate Cancer Foundation of Australia and the Peter Duncan Neurosciences Research Unit.

Australia’s unique landscape was subject to an equally varied range of weather conditions for this year’s Challenge, which produced an endless list of ‘tales’ and interesting images loaded to the event’s official website.

There were some mighty fish caught including a 112cm barramundi in Queensland; Murray Cod over the magic metre mark and some big “Top End” trevally. The southern States produced great results with flathead over 90cm, cracking snapper and a 77cm brown trout from Tasmania.There were 157 individual prize winners across Australia all sharing in the $210,000 prize pool - see below for links to winners.PIRTEK provides $90,000 cash which is divided between 25 mystery length target fish, providing all entrants with the opportunity to win big without necessarily catching the biggest fish.One of the highlights of the challenge is the On The Water prize draw and this year’s major winner was Chris Rossetti from Charlestown, NSW who won the $29,000 boat/motor/trailer package thanks to Stacer and Evinrude.

Other major prize winners included Dale Cooper and Patricia Johnson, who won Snap-On Tools tool kits valued at $5000; Wayne Gibbs who won a Lowrance Hook 2-12 inch FishFinder valued at $2149.00; Ken Osborne who picked up a $2000 tackle pack thanks to ABU Garcia and Berkley; Todd Pickering will be adding to his tackle box thanks to a $1700 BCF gift card; and Nicole Wicks takes home a $500 Valvoline care pack.One of the most popular prizes every year are the Spotters Australian-made sunglasses.Tournament director, Michael Guest, was delighted with another record-breaking year.“I was very proud to see so many keen anglers supporting the Challenge and our charity partners in this year’s challenge,” said guest.“It goes to show what a bunch of dedicated anglers can achieve when we all get together for a good cause.“I know conditions were tough in some parts of the country, especially in Darwin battling cyclone Marcus and the fire ravaged area of Tathra in southern NSW, but it didn’t slow too many fishermen down with thousands of photos uploaded to the website across the country.PIRTEK Australia’s Chief Executive Officer, Stephen Dutton, said that the success of the PIRTEK Fishing Challenge was something all his company’s staff, suppliers and franchisees could be enormously proud of.

“It is hard to believe that the PIRTEK Fishing Challenge has just completed its tenth year and we have again notched up record numbers,” said Dutton.

“It is incredible to think how this initiative has grown under the leadership of tournament director, Michael Guest, who came to us with a terrific vision 10 years ago.

“While the PIRTEK Fishing Challenge provides us with a chance to bring so many anglers together for a fun event with some terrific prizes, it is also satisfying to know that so much money and awareness is being raised for Prostate Cancer Foundation of Australia and the Peter Duncan Neurosciences Research Unit.

RESULTS, PRIZE WINNERS & IMAGES CAN BE FOUND BY FOLLOWING THE BELOW LINKS (by Region):

- On The Water Prizes