The World Championships are over and we are on the road to Prague, just stopped now in Ceske Budovice for breakfast/coffee at - wait for it - McDonalds! The boys are looking pretty comfortable tucking into their Veprova Bageta Deluxes, loosely translated by John Fisher as "a Big Mac with a lot of something". We have another couple of hours of driving to Prague airport where Luke and Hobbsy will catch flights home and the rest of us will go on to Devon in England for the Commonwealth Championships.
The Worlds have been an amazing experience. Many of you will now know the results. In the teams event the Czech Republic won, followed by the French and English whilst the individual World champion is Lubos Roza from the Czech Republic followed by Piotr Armatys from Poland and Andrew Scott from England. As an Australian team we'd like to congratulate the winning anglers and their teams for the incredible performance they've produced at the highest level of our sport. I know that each of us has been in awe of the skill we've seen here - and been inspired to strive even harder to aquire the capability to compete on the world stage.
The performances of our two top rods are really encouraging. Both Luke Barby (18th) and Mark Hobbs (40th) fished out of their skins to produce those results. Our team result of 13th was lower than the top 10 finish we had quietly hoped for, but we believe it is a true and fair reflection of where our team stood in the company of the accomplished teams we were competing against. There is much work to do. The Australian focus on the world championships will now shift to Bosnia as 2015 approaches. Those of us who will not be there will be keen to catch up with next year's team to discuss our experiences in more detail.
I can't finish this very brief summary of the championships without mentioning a few of the highlights. There are too many to allow me to talk about them all but a few that stand out are: the spring in Mark Hobbs step as he arrived back having performed so well in several sessions; the feeling of elation amongst the team as some of Mark's and Luke's results confirmed that the Aussies were competitive and were being noticed; John Fisher's encounter with a massive pike that followed then engulfed a Woofter Booby in full veiw of the boat (I watched John play this fish for several minutes before he almost inevitably lost it); and the very many personal encounters that each of us had with fellow competitors from many countries. This last point is possibly the most important. John Horsey from the English team told me that people often don't understand how strong the personal contacts are, and how deep the friendships become, amongst competitors at world championships. All of will be going home with new friends.
By the way, over 10,000 fish were caught and released - the fishing itself was obviously a highlight!
I've mentioned before how well organised the event has been. The uncountable positive comments from all teams confirm this. To Milan Hladik, Jiri Pejchar and the entire organising committee, administrative supporters, judges and controllers comes a sincere "Thank You" from Team Australia.
This Post has been interrupted by the flight to England and the drive to Devon. Pete Butcher and Jim Williams made the quick mental shift from driving on the right to driving on the left and very capably got us to Devon with out incident. We received a very warm welcome from the Australian team that is already here - the Green Hoppers - and we've quickly settled in. It has been great to see the other team and to catch up. Mark Fraser joins our team and we welcome him. Rob Staples has arranged some practice opportunities for us for which we are very grateful. We'll now get into the midset of a different competition and, once again work hard to produce a good result for both Australian teams.
This event is known as being a competition fished in friendship and already some strong connections have been renewed. Phil Price from Wales was one of the first to welcome us. Phil and his wife Angela looked after Christopher Bassano and I last year with great kindness. The Scottish ladies who have been close friends for years were also waiting for us. There are many other familiar faces and I'm sure this competiton will live up to all expectations.
At this point I'll sign off and hand over communications to Rob Staples who'll produce the updates for this event. As a non-Facebook user being guided by the younger, more "connected" members of our team I've been amazed by the reach of this medium. Thank you to all who've made taken the time to read the posts, make comments, tolerate the gaps between them and ignore their deficiencies. I might be about to become a social media devotee, so look out?!
Cheers.
Tim 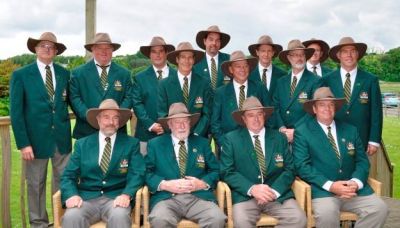