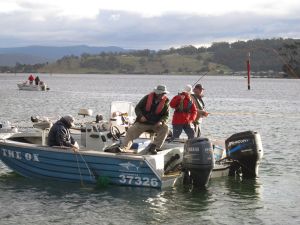 Despite preceding weeks of calm winds and glassy conditions Georges Bay threw a bit of a curve ball for the weekend of the now traditional winter interclub, multispecies competition at St Helens. Blustery southerlies flecked the bay with whitecaps and chilled the visitors practising on Saturday and made the Sunday comp far more challenging.
Some 18 visiting anglers in took on a small contingent of locals and by early morning a small armada of dinghies were scattered across the bay; the goal to catch the greatest diversity of species possible. Rocky points, sea-grass flats, jetty pylons, fast flowing channels and shallow banks provided varied habitats and required differing techniques to maximise chances.
Garfish cavorted near the channel markers, Squid cruised the channels between sea grass beds and who knew what lurked amongst the harbour-side structure or patrolled the drop-offs along the seagrass edges. Mackerel and Salmon tormented us with brief and infrequent flurries of action through the centre of the bay so there was plenty of opportunity for those who persevered.
The scheduled mid-day BBQ on sheltered O’Connor’s beach provide an opportunity to re-new old friendships, warm up, re-energise and compare notes. (And of course check the score!)
Between the two teams a total of 11 different species were caught and it’s pleasing to note that despite the blustery conditions 4 were taken on the fly.  The usual garfish and salmon were caught but Mark Hoggins added weed whiting to our mounting list of fly-caught species (significantly the best scoring fish at 55 points) and to more than a little derision Gary added a toadfish.
Van Diemen boated 5 species in total, Salmon, Trevally, Mackerel, Flathead and Cod for a total of 176 points. Break O’Day locals managed 10 species adding Wrasse, Leather Jacket, Weed-whiting, Garfish, Squid and yes, a toadfish for 391 points getting the bonus points for 4 fly-caught species.
Chatting around the BBQ sheltered from the breeze in the mid-day sun, watching terns and gulls join the salmon in harassing schools of baitfish just off the beach, several anglers reflected on our good fortune. To be able to have such a terrific angling experience in the depths of winter in such a beautiful and productive environment we are indeed lucky. Selfishly I’m almost reluctant to let others in on the secret.
Thanks again to Van Diemen Anglers for making the journey east.
Howard Jones
President; Break O’Day Sports Anglers 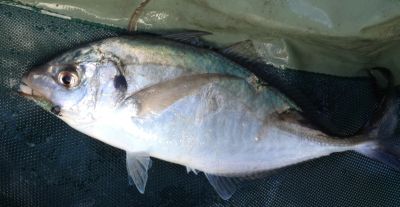 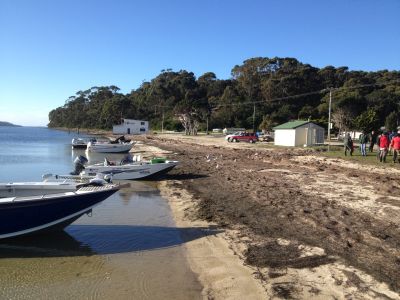 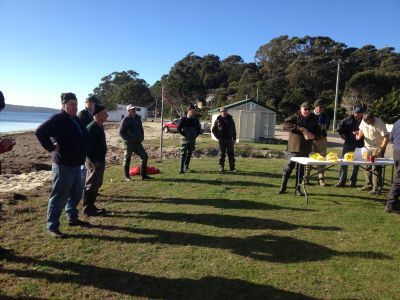