Presented from Issue 107, December 2013
A common question asked by new or potential kayakers is “what’s best – paddle or pedal?” The answer will vary depending on many factors. Intended use and budget are probably the main ones. This article will look at different propulsion systems commonly available and their pros and cons, hopefully making that decision a bit easier for newcomers to this kind of fishing.

Paddle kayaks have been around for a long time, and remain popular. In some styles of fishing they can be vastly superior to any currently available pedal kayak. This tends to be two different extremes. ‘Glass ‘yaks and fishing orientated skis are hugely popular with offshore fishermen who have to cover long distances, and especially where surf launches are required. As far as I know, at this time, there are no pedal powered ‘glass (or CF) ‘yaks or skis. They are all powered by paddle, as other propulsion systems would be a liability in the surf, and a skilled paddler with a paddle in hand has some big advantages in stability in rough water by being able to brace with the paddle. These kayaks tend to be longer and skinnier than most other fishing kayaks, which gives them a speed advantage, but may pose problems with storing and transporting. If you want to chase tuna, launch / land through surf or spend a lot of time fishing offshore reefs, glass is what you want.

At the other end of the spectrum are small rotomolded plastic ‘yaks. These will suit anglers who want to access small rivers or who have a long carry to get to their chosen waterway or numerous rocks and rapids to portage around or drag over. Typically cheap, light and sturdy, these can be carried and dragged some distance over all sorts of terrain.

Very popular on the mainland with bass anglers, and could be just the thing in Tassie for some trout streams and lakes or some skinny bream water, lagoons etc. This type of kayak may be as small as 3m long, and can be had for a few hundred dollars. As kayaks get shorter they become slower and harder to paddle.

That leaves – everything else. Lakes, bays, estuaries, inshore reefs where a sheltered launch and landing is possible, larger rivers, even not so large rivers that have somewhere to park a car and a not-too-steep bank somewhere. In these situations, pedal power takes a lot of beating. Plenty of people fish these areas successfully from paddle kayaks, but on any given day you are likely to see just as many or more pedal kayaks, despite their extra cost.

While paddle kayaks (apart from the high end ‘glass ones) are considerably cheaper than pedal kayaks, they do have some advantages.

Apart from the cost, they also weigh considerably less, several kilograms lighter in most cases. Complexity – they aren’t! Virtually no maintenance is required, the ultimate in simplicity. Shallow running – you can paddle them in a few inches of water, or run them down shallow rapids without concern. They are manoeuvrable. Go forwards, backwards, turn on the spot or even move sideways with a little practice.

The downside is they are hard to hold position in tide, current or wind without tying up or using an anchor. Drips from the paddle can get annoying. You can’t hold your rod while trolling to feel those little taps or to impart extra action to your lure. Watching your mate in his Hobie eating a snack and having a nice beverage while he pedals and you paddle to the next spot.

Pedal kayaks aren’t only popular due to Hobies’ good marketing. They do have many advantages. You can move and have both hands free, or steer and still have one hand free. In a current or wind, you can maintain position, without an anchor, and still have hands free to fish. To me, this is the biggest advantage. When you have hooked a good fish you can pedal into clear water to fight and land it, all the while holding your rod, and even winding the reel, to keep tension on. This is next to impossible in a paddle kayak. Pedal kayaks are amazing for trolling a lure. You can hold a rod and feel any bumps, add action to the lure etc. Often you can set your course and hold a rod in either hand while trolling. This increases catch rate considerably with many species. You can also enjoy a drink or a snack while moving from place to place.

On the down side is cost. Pedal kayaks are considerably more expensive than their paddle powered counterparts. They are also more complex. Not over the top, but certainly more moving parts, and more to go wrong and maintain than a paddle kayak. Drives can be damaged by shallow rocks or tree stumps, and are not suitable for surf or rapids.

There are other ways of propelling a kayak too: namely, sail, and motor. Sails come in a variety of shapes and sizes. Some are part of the kayak package, others are aftermarket add ons. The most basic is little more than a bit of sailcloth that attaches to the sides of the kayak and is held up by the kayaker. It allows you to sail downwind, but not to paddle or have a hand free. An example of a kayak designed to sail is a Hobie Adventure Island and Tandem Island. These very capable vessels have a long main hull with two removable outriggers. The outriggers can be folded against the main hull to land fish, and people like Josh Holmes have caught all sorts of large fish from them. They have daggerboards, so can sail into the wind up to a point, but again by kayak standards they are quite complex, large, heavy and expensive.

Some people motorise their kayaks. To me, having a noisy outboard defeats the whole purpose, but electric motors are popular. Again, they add to the complexity, cost and weight (batteries are heavy!) of a kayak, and are notorious for getting people into trouble, not out of it. But, if a physical disability of some kind makes paddling or pedalling difficult they could be an option.

Some of the bigger manufacturers have recognised this, and offer powered options within their range.

Hobie make the eVolve, which is an electric motor designed to mount either in the Mirage drive well to use instead of the pedals, or on the rudder, so you have the option of pedalling as well as motoring. Currently, it will not rudder mount on the Pro Anglers, Island series, or inflatable’s with the factory mounting kit. Ocean Kayak is another who has a purpose built motorised kayak in their range with the Torque series of kayaks. Many people make their own mounts and attach electrics to their kayaks too, some with more success than others. There is even a small Aussie company (gyroyakmounts.com) specialising in making mounts, complete with remote steering, throttle and tilt, to put an electric on a kayak. 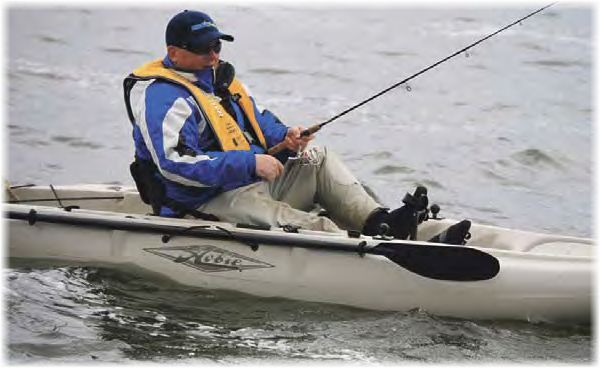 Still undecided? Tamar Marine is the Tasmanian dealer for Hobie kayaks. They are more than happy to let you take kayaks in their range for a test paddle / pedal (phone ahead to organise). Other retailers also have ‘demo days’ from time to time. Another option is to get in touch with various kayaking / canoe clubs.

Tassiepaddlers is a local group with members state-wide, who hold events throughout the year. Several members have more than one kayak and most are happy to make them available for newcomers on various outings.