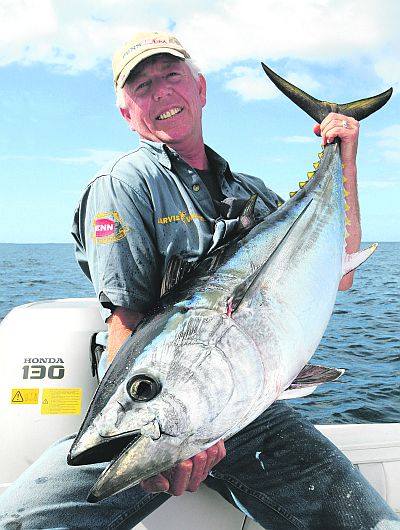 by John Orchard
It’s in full swing - and once again time to dust off the tuna lures, give the rods and reels a quick service  and get out there on the ocean doing what we all love doing – chasing the infamous southern bluefin tuna.

This season has started earlier than expected with numerous bluefin to 35 kilo’s being taken from many different locations plus a couple of larger fish being taken as well – Stuart Nichols from Personalised Sea Charters operating out of Eaglehawk Neck has already landed one fish this season weighing in at an impressive 103 kgs. (See the photo)
Tasman Island, the Hippolyte Rocks, the Friars at the bottom end of Bruny Island, the Aktines at Southport, Pedra Branca and Matsyker Island have all produced good fishing so far. The unusual thing about this season compared to years gone by is that striped tuna are being taken right along side the bluefin. So what you might say?
Well, generally striped tuna prefer 17 degrees plus – bluefin prefer 15 degrees or less. It is common to pull albacore in amongst the bluefin but rarely do you find stripeys mixing it with the big boys; this season has been quite the opposite so far.
The other unusual thing about this season is that whilst St. Helens has struggled to pull many tuna of consequence so far, (see late news at end) they are turning up in places where they aren’t normally found. This week there was a large school of albacore tuna working hard only a few nautical miles north of Waterhouse Island in the States north east – at the same time a friend of mine was getting stuck into striped tuna in the Derwent river fair smack in front of the Wrest Point Casino – now THAT is different!!!
Although reports of fish at St. Helens have been sporadic over the past couple of seasons, all this makes you wonder if the seasons at St. Helens have changed with the warmer currents we are experiencing and that the fish are actually going through much earlier, following the temperature break as it heads south – if this IS the case then St. Helens should fire up again late in the season as the warm water moves back north, followed by the cooler nutrient rich water – bear in mind that tuna are usually found feeding on temperature breaks rather than in constant temperatures.
Some anglers that I have spoken to have fished this area for many years and say that they have always fished from mid January until mid April; this year the water temps off St. Helens during this period have been extremely warm – maybe too warm? - and few, if any distinct temperature breaks.
Could it be that St. Helens now has two seasons – an early one that starts as the warmer water comes down the coast as early as late November/December and then a later season as the warmer water retracts back past the area and a ‘dead’ patch in the middle when the temperatures are too warm and constant? – I may be wrong, but it sure makes for an interesting theory for northern game fishers to consider!!
Many of the bluefin caught in the south so far this season have spewed up a variety of baitfish including squid, mackerel, pearl fish and anchovies – this makes lure choice a lot easier for anglers because the fish aren’t focussed on just the one bait species. Later in the season when the redbait turn up in large numbers there is nothing more deadly than a Meridian ‘brown dog’ – in the mean time any of the mackerel patterns will work well – Bonito, Pink Bonito, Stripey, Green Lumo and Firebird all consistently catch fish if the weather conditions are right – cloudy with a bit of surface chop.
On calm sunny days your best chance will be Mack Baits, Classic F-18s or Halco Tremblers in similar colours.

St Helens fires
The first week in April has seen two very big yellowfin caught in less than 100 metres of water just off St Helens.
The first, a fish of 73.6 kg was Easter Saturday 3 April on Tim Anderson’s Serial Killer just off Merricks Reef. It was quickly followed by another, ten kilos heavier by Ken Turner just five miles off shore.
Fish of this size are once in a lifetime catch and it is sure to spark some huge interest. It seems cooler water is now being pushed inshore from the south and this has had a significant influence.
After a slow season off St Helens it has certainly ramped up now and those that look at Easter as the end of their fishing at St Helens will be looking to get a whole lot more fishing in.
John Orchard
103 kg taken by Jaime and Neil Willcox 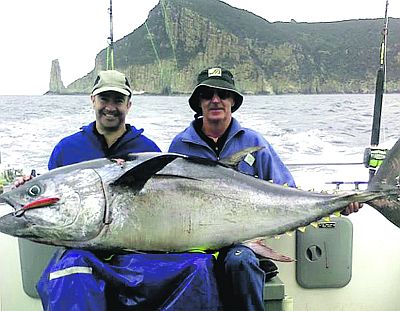 A smaller bluefin, taken on fly by John Orchard

Graham Purton, with a 73kg yellowfin taken off St Helen 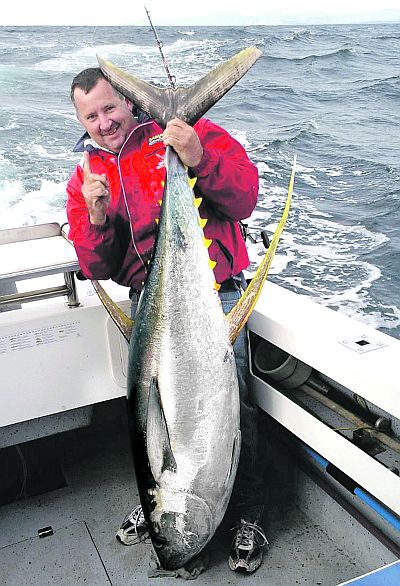 103kg at the weighin at Pirated Bay 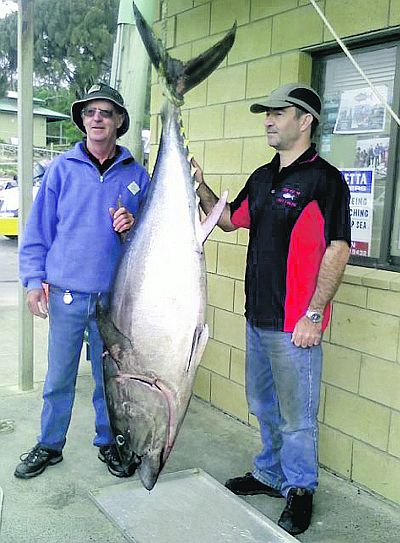 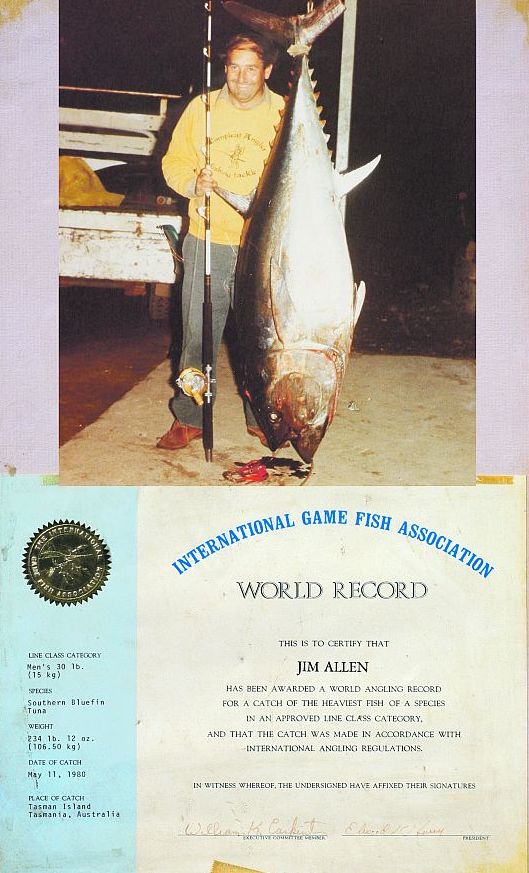