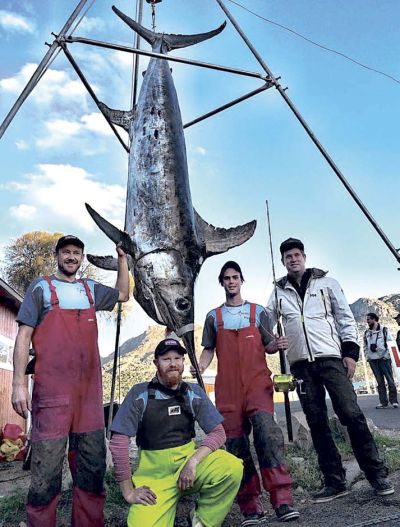 Presented from Issue 115, April 2015
We headed out of Coles Bay and zoomed through Schouten Passage between the spectacular Hazards peaks and Schouten Island on Tasmania’s East coast. The sun was shining, the breeze was dropping and the twin Yamaha 115s were quietly humming on my 7m trailer boat; ChoonaChasa. We’d entered the Coles Bay Classic run by the Southern Game club and we were heading to the edge of the continental shelf to chase what I believe is the mightiest fish in the ocean; broadbill swordfish, Xiphias gladius!

We arrived at our chosen mark around 0900. A quick scan of the ocean floor revealed undulating features holding fish that we predicted as blue eye trevalla, gem fish, blue grenadier, frost fish and more. A nice ‘Scatter Layer’ of fish and probably squid mid-water added to the food chain and we decided the area was prime for a deep drop or two.

We quickly finalised our first sword rig; today we had a Penn Power Curve 24kg rod and Penn 50 VSW reel filled with 24kg Platypus mono. Add to that a 300lb JEM wind-on leader to a large swivel clip. On the clip an LP Electralume tri-colour light and then a 400lb leader to a 14/0 offset J hook. On the hook a whole arrow squid fixed in place with waxed thread and covered with a 14 inch yozuri squid skirt with glow eyes. We attached a breakaway sinker with a short length of thin line and over she went down to the depths of over 500m. We then deployed an electric reel with baits for the bottom fish to determine what was lurking down there and soon pulled up a blue grenadier. There had been no bites on the swordfish line so we retrieved and moved in-shore somewhat.

Kyle Longmore who had been fishing with us for some time had earned his turn ‘On Strike’ and was the chosen crew member to reel in any swordfish we encountered for the day. We made our second drop and watched our chunk of concrete sinker race towards the bottom. The rod was then put in the holder and shortly the line tightened and the sinker broke off.

Just as I was preparing a second rod and bait I noticed some large bangs on the sword rod; classic swordfish attacking. “Kyle, I think you’re onto something” I yelled, and quicker than a mackerel on a sabiki Kyle had the rod in his gimbal belt and was winding…. The line tensioned gradually until the fish took a little drag and then Kyle felt head shakes and we were confident we’d hooked the target species!

A few minutes later the fish arced to the surface and made the first of many jumps confirming our suspicions and hopes that we’d attached ourselves to a large swordfish! The fish jumped another 22 times during the next 2.5 hrs while we attempted to edge closer, always wary of our thin line and trying to keep an angle on the fish.

The afternoon ticked by, but gradually Kyle got closer and closer. There were several nervous moments when the fish circled back under the boat but Kyle was skilled enough to have his harness off when the fish was close, back the drag off and get the rod tip into the water avoiding disaster every time.

The idea is to tire the fish gradually, much as a person would tire on a jog, the pressures applied to the fish are not great and the fish dictates 99% of the battle. It is unknown what discomfort fish feel but thought that their brain capacity doesn’t allow them to feel pain as mammals know it; The way the fish behaved was more as though it had an irritation. A simple example is that if a mammal was hooked it would go towards the pressure relief where a fish pulls away. Sharks also are regularly tagged and released only to swim back to the boat ready to take another bait.

Finally Simon Turner (1st mate) managed a wrap on the leader and I had to help as well so great was the pressure. We got the fish up a little but then it swam back under the motors! After 10 secs that seemed like a lifetime it came up behind the boat and I reached out and got our long handled “Grim Gaff” into it. We then used my block and tackle to haul it aboard and there were more than a few high fives!

Broadbill swordfish are more than just a great gamefish, they are brilliant table fish. This fish wasn’t going to waste; BBQ, pan fry, curries, deep fried, etc. - just delicious! The meat is firm and pinkish with a subtle sweet flavour and quite moist.

About swordfish in Tasmania

The fish in Tasmania are thought to be part of the Western Pacific stock; one of seven world populations of swordfish. Only in the Mediterranean are they considered under threat, all other fisheries are considered “Of least concern” in regard to overfishing. The commercial take per annum in our stock is around 10,000 tonnes of mostly smaller fish as they are lower in mercury content and more highly desired especially for export markets. The amateur take is probably under five tonnes, and while these fish are infrequently caught by recreational fishers they are not rare. Commercial operators have caught them to around 500kg in the Western Pacific and amateurs to 415kg in weight.

Studies by CSIRO have shown swordfish live to around only 17 years and grow very quickly, partly aided by their unique lack of rib bones. They attain one metre in their first year and breed by around three to five years old. It’s thought the fish travel to the north eastern Pacific to breed in autumn and summer before the bigger fish, that can handle a greater temperature range and lower temperatures, move south to rich feeding grounds like Tasmania and New Zealand. Smaller fish concentrate in areas like the QLD coast and Mooloolaba account for almost 70% of the commercial take.

The newly developing recreational fishery in Tasmania has the potential to provide a much needed tourism boost to coastal communities and can become a world class fishery if managed well. Preserving the fishery for amateur use shouldn’t be a problem due to the commercially undesirably large size of fish present.

As the fishery evolves anglers will move towards a higher rate of ‘Tag and Release’. Two fish have already been tagged and released. A satellite tagging program planned by IMAS will also provide invaluable information on the movements and post release survival of these fish when it gets completed.

However, Tasmania also needs some regulatory changes away from the current possession limit of 15 per person.

New Zealand uncovered the bulk of their recreational swordfishery almost 15 years ago, and since then amateurs have taken up to 300 fish a season. It seems they haven’t put a dent in stocks or catch rates since commercial long lining in those areas was banned. Amateur economic input per fish taken has been shown to be up to 100 times what commercial operations will input for the same fish so this bodes well for local economies and fish stocks!

By Leo Miller skipper of ChoonaChasa