This could well be the new number plate slogan for Bluewater anglers. This season we saw good numbers of small albacore at St Helens swimming with the marlin. Yes! the marlin run was short, but good this year.

Southern bluefin turned up early and even the schoolies were big’uns. Mega sized albacore inhabited the Southern waters for a good while. A very fit looking 127kg Bluefin caught at the Light Line competition by a un-entered boat was an excellent surprise as it looked like they may have arrived early?

Broadbill… yes that’s right broadbill. Captured while fishing out wide at the Neck.

No Yellowfin to speak of anywhere was a bit weird?

Bluefin then went quiet in the weeks leading up to the Tom Jenkins Memorial Bluefin Competition.

THEN - POW! The day before the Tom Jenkins they fired right up and have been going strong since.

We had been asked by Sebile lures Australia to trial one of their range. The Sebile Bonga Jerk. When it arrived it was quite different to most lures we had used before. There had been quite a lot of thought put into the design and was of fantastic quality. We rigged up the two we had been sent and got in for an early night.

The Sebile Bonga Jerk had only been swimming for 5 minutes when it was absolutely smashed and line peeled off the PENN 50vsw we had at short corner. We were hard up against the rock at the Little Hippo and in very shallow water. I swooped on the rod as Clinton Howe started to clear the other rods. I was in the corner of the boat, rod bent right over and line still streaming off the reel. The fish made a sharp turn heading for deeper water and before we could regain position we had parted ways — CRACK

He was a very good fish and we had him on for around 5 minutes. Now that would have been a secret we may have taken to the grave. Some how, and none of are sure why, but the drag was set way beyond what it should have been. No excuses though and we checked them all and rigged up another Bonga Jerk. Two hours later Adrian ‘Mozza’ Morrisby was on to a good fish.

We had seen a number of “feeds” in and around the two Hippo’s when we spotted one wide, south of the Big Hippo. The Bonga Jerks will hold in the water while doing 15 plus knots and this is of an advantage when running Skirted lures and motoring over to a “Feed”.

We slowed to a normal trolling speed and worked the feed for nil result. We were leaving the “feed” and returning to the Rock when BANG … the Sebile on short corner went off again and we had Adrian on to a very good fish. Working as a team and taking advantage of the wind we managed to have a very fit 120kg Bluefin at Adrian’s feet in just under an hour.

Three very happy fisherman headed back to Pirates to help get ready for the Tom Jenkins. The “Jenkins” was a fabulous competition with a number of good fish caught and a few very notable battles that ended up fishless. Marc Largerewskij was hooked up to a fish for 5 long hours when the hooks pulled and they got their lure back.

Dylan Jarvis on board “GREY GHOST” was hooked up to a good fish and battled on well after dark with the aid of torch light. Graeme Purton managed to land an excellent fish with the aide of the team on OFISHAL BUSINESS. The Bluefin pulled the scales down to 99.80 kg, but was ineligible due to Seal damage.

The event winner was Stephen Fitzallen on the good ship SHANTA who managed to boat an 80.5 kg bluefin on the first day on a very dubious harness. He even had to gaff the fish himself after his crew had a few “windy whooshes”

It was a fantastic 3 days of fishing that extended into the weekend. One of the Jumbos caught on that weekend was gutted and gilled only to find in its stomach — surprise — four mutton birds. Michelle Nelson had an awesome surprise fishing out of Fortescue Bay. Michelle and her partner Jason McGiveron went out in their 15 foot dinghy “Reely Nauti” and bagged a very nice 108.5 kg bluefin. The fight lasted 1 hour and 15 minutes before Jason gaffed it in the dark and landed a pending Australian and World record at their feet.

It continues to be a season that keeps people on their toes. A season I think will go well into July. There are still good reports out of Portland and the massive schools of blues that made their way down the west coast of Tasmania have disappeared? They have not come round the corner yet, so fingers crossed they sort their compass out and arrive at a place near you soon.

Do not be too quick to pack all your gear away just yet. Matter of fact, get in and drag some more out. Beanies, gloves and thermal undies. Thermos full of hot soup and pack your 12 volt pie oven for tasty warm food to keep you going on a chilly winters day. Turn on the radio, have a laugh with mates and forget all the worries of the week. Have a good look at the weather and get out and surprise us with what you catch. 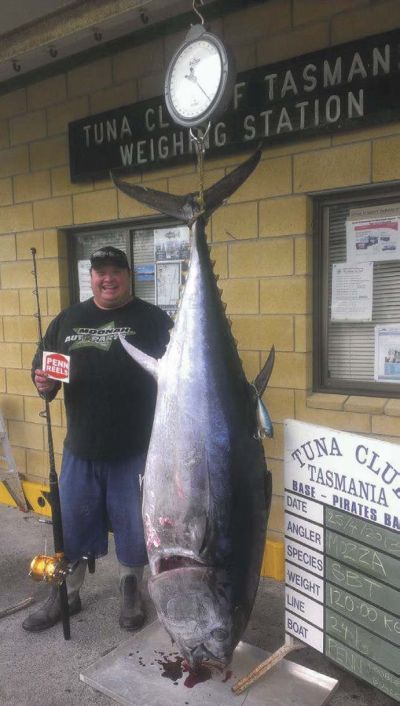 Graeme Purton is a happy boy.