Presented from Issue 101
Catching the fish of a lifetime was one thing, but preserving it as a trophy was going to be another. Since the capture of the massive 147kg Southern Bluefin Tuna which we had now affectionately called ‘Charlie’, the desire to have the fish immortalised grew.

But just how do you freeze a fish head and backbone that weighed over 50 kg and measured over 2 metres long? Most of the flesh had been shared among friends, family and neighbours and in the first week alone it was calculated that over 140 people had eaten a meal from “Charlie”. Some had commented “best sashimi ever” whilst others had preferred the taste of the smaller, tastier, softer school bluefin tuna. Charlie had been grilled, fried, curried, marinated, smoked, baked, battered, mornayed, and yes…even eaten raw. 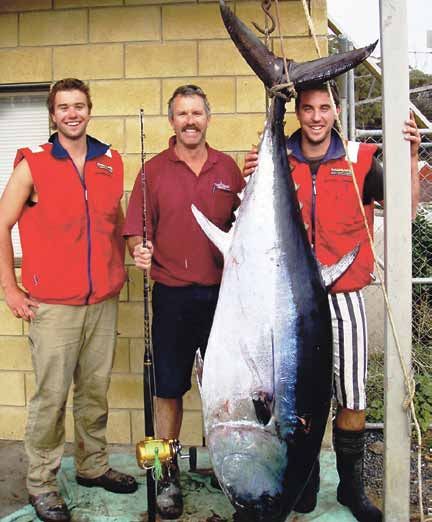 A full fish mount was now out of the question, and it was decided that a head mount was going to be the best option. Finding a freezer that was big enough and empty enough to fit a fish head the size of a garbage bin in was a task in itself, but after a bit of a food shuffle we managed to locate one within the family. Once we had the head securely wrapped and frozen, we breathed a sigh of relief.

The task of bringing Charlie back to life, was going to need someone who would tackle the project without it being ‘just another job’, someone who would throw their heart and soul into it, someone with patience, skill and dedication. After a statewide search to find a craftsman able and available to tackle the project, a feature article in TFBN (issue 96 Feb 2012) about fish taxidermy led us to John Wilesmith who now continues the article.

“I have been practicing the challenging art form of skin mount fish taxidermy for a number of years now and earlier this year I was offered a challenge that I simply could not refuse. Geoff Madden and his sons Ben and Chris had caught a massive 147 kilo Southern Bluefin Tuna (featured in the 2009 issue 81 of TFBN) off the east coast of Tasmania. When I was contacted, asking me if I could make a trophy of it, the head of the fish had already been frozen for 2 years. I liked the challenge though and agreed, imagining it was going to be no ordinary task.

It wasn’t till the head was delivered that I realised just how big a job I had taken on. The massive head dwarfed any trout I had previously worked on and I realised that I was going to have to upsize my mould making and spraying gear for starters. At first inspection the head was going to need some modeling or rebuilding before the moulding process because of the angle it had been cut from the backbone and to get its original shape back. It was also needed to allow it to fit properly onto the hand crafted Huon pine backing board. A traditional skin mount wasn’t going to be practical, so I decided that a fiberglass reproduction was going to give the best result.”

The following is a brief outline of the process and challenges involved in making such a large trophy.

“Once the work on ‘Charlie’s’ head had begun, I realised that it was a much bigger task than first thought. It measured 78cm long by 56cm deep and 95cm across the pectoral fins. After the head had been reshaped at the back, it was delicately set in place in the recently upsized and rebuilt mould ready for the first half to be encased in plaster Once set, the other half could be cast. The pectoral and pelvic fins were removed from the head and had their own separate moulds so that no details were lost.

After seven 20 kilo bags of plaster were used, we had the complete set of moulds for Charlie’s head and fins. Casting a mould in the middle of winter didn’t provide the best drying conditions and because of all the wet plaster, the head mould was so heavy when cast that a small trolley with casters was needed in order to move it around.

Over the next few weeks it was wheeled around the yard a fair bit finding the best place to dry it in the sun and whatever breeze was on offer. Only when the moulds were thoroughly dry could the fibreglass head be cast from them and then, when done properly, the cast would be an exact copy of the original head.

Once the fibreglass cast was removed from the mould you could certainly appreciate the size of it - about as big as a tea chest! Now the pre paint preparation work could begin in earnest. Once the cast fins were attached to the main head, the joins were filled ensuring a smooth and perfect transition to the body. A lot of patience was essential to complete the sanding required to remove the mould seam lines and any blemishes caused by the casting process. Also challenging was the modelling necessary to give the inner mouth its detail, including the tongue and individual teeth.

Finally, after waiting many weeks for custom made eyes to arrive from overseas, as standard size eyes were too small for this project, they were set into the head. Once all the prep work was complete the fun task of painting and bringing it to life began, but not before careful scrutiny of the many photos of the original head to enable the exact colours to be reproduced.

Painting and finishing was probably the most satisfying stage of the process as all the work from the previous stages seemed to finally come together and the trophy began to come to life. The air compressor and spray gun needed to be upsized for most of the painting, as the standard detail airbrush was too small to cover such a large area evenly.

To give the fish a natural look, pearl paints and iridescent colours were used. The small airbrush was perfect for completing the shading and fine detail, and finally the job was finished with a gloss varnish to give “Charlie” a wet, fresh out of the water look.

As with any project of this size and nature, there were many lessons to learn. There were hurdles, challenges and mistakes made along the way but the end result made it all worthwhile. It’s satisfying to now realize that this project had met all the expectations of me and the customer and to know that Charlie is hanging as a permanent reminder of that epic battle that Geoff and the boys had in landing such a magnificent fish. I hope the trophy will be an inspiration to catch plenty more in the future.”

Indeed, to have a trophy such as “Charlie” is a testimony not only to the battle fought and won on the day, but also to the caliber of the craftsman we have in Tasmania who was able to reproduce to the finest detail a saltwater species of this size. It’s great to also have the evidence immortalized that puts beyond all doubt and limits any exaggeration as to the real size of “Charlie”.

So once the Everest of fish has been conquered, what more is there to pursue? If it was all about the fish, you could say “nothing” … but it’s always been more about the fishing, and that passion, once inherent, always lives on. 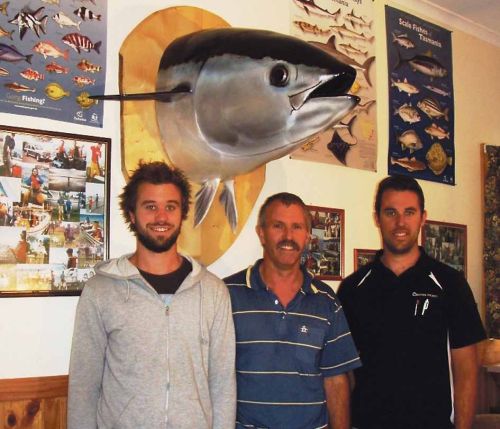