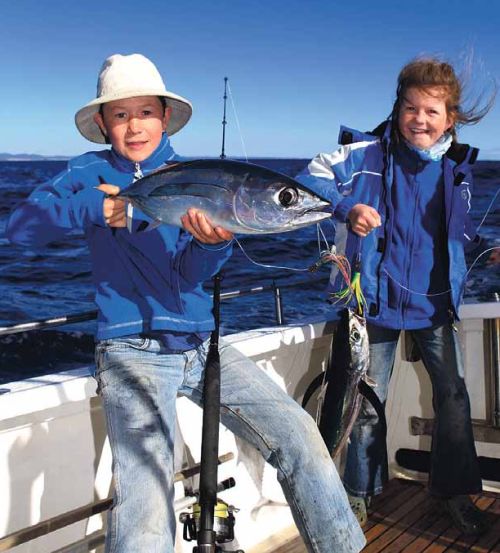 Presented from Issue 96
I fly fish for trout and Rocky chases offshore species like tuna.

That is why when I get a day free to spend fishing on the coast with the kids I go out with Rocky who owns and operates ‘Professional Charters.

It was a an early morning start from the lakes - 3:30 a.m. to be exact and as you can imagine it wasn’t difficult waking 12 YO fishing junkie Lachlan Hayes from his slumber. It was near impossible to get my 10 YO anti fishing activist Maddie out of her bed. Three hours and six kangaroos later we drove into St Helens without a speeding fine. I thought it was a great start to the day as I had been nabbed on a couple of occasions on the Fingal Valley road before.

It was just 10 past 6 and at the risk of being a little later than we were I thought it prudent to get a couple of cappacinos from the local Banjos shop. It was obviously a good call when I saw Rocky’s face light up as we boarded. You see, all guides love it when the clients are seen to be thoughtfully looking after them.

It was a sensational morning as “Saltshaker” glided out of the placid Georges Bay. I consciously thought of what a great life Rocky has guiding out of this beautiful place. The kids were obviously excited as they bounced around the fly bridge. Lachie more so than Maddie.

Once we cleared the barway the lures were set. Rocky explained the pattern and the logic behind it all. So very different to my fly fishing guiding but I began to see that there was much more to tuna fishing than simply towing a lump of plastic around the ocean. Another difference I noted was that at this time of year Rocky very much operates in a 3 dimensional world and I work more within 2 dimensions.

The kids pointed out a school of dolphins heading our way and it was lovely to watch them playing in the wake of the boat. I wondered if it was a good sign to see them near because that it meant that the tuna were not far away. On the other hand maybe they had chased away or eaten up the tuna?

Every time I venture to sea I feel at sea myself. The initial feeling is one of a vast ocean and where do you start? I thought of some recent work that I had done with the Australian Fly Fishing team and a wonderful Australian Institute of Sport - Sports Scientist, Rick Shuttleworth. Rick shared with me the result of some work that he had done recently with the Australian Yachting Team. So much was learned by fitting head cameras to the caps of the top level sailors. By simply sitting down after the race and taking in simply where the guys were looking with their eyes during the race it was obvious that the greater athletes look at different things, and more often, than the lesser competitors.

I watched and studied Rocky. His eyes were everywhere. He constantly scans the entire sea with the exception of where we had already travelled as well as giving the very flash depth sounder a lot of attention. We zig zagged the ocean and whilst I didn’t ask it was obvious to me that Rocky was working the lures through different light angles as well as wave travel direction. Some of the lures actually changed their swim action depending on the direction and speed of “Saltshaker” in relation to the swell. Not too different to how I search with wet flies if the fishing is hard.

I must admit I was starting to get bored when I looked and saw a huge mob of mutton birds about us. I realized that Rocky had probably seen them from the bridge with his binoculars 15 minutes before. I sensed that things had changed in our favor and sure enough it was only a short time before two rods went off. Lachie was up like a Jack in the box and to my surprise Maddie wasn’t far behind him. Maybe it was Maddies love for sushi that motivated her.

There isn’t much of Maddie and she obviously needed help with extracting the tuna from its world. Maddie clearly had the idea that it might pull her in when she asked me “hold onto me Daddy”. It was great to get these first fish onboard and they were crackers. Others came more readily and easily after those. We had a ball and Rocky showed us how to bleed and care for the fish so that they would be awesome on the table. We stopped inside the bay and enjoyed cake and coffee while Rocky expertly dressed down the fish. The fillets were skinned and the sought after belly flaps dressed out. Maddie ate straight from Rocky’s Swibo fillet knife. She has always eaten raw fish and she just loves tuna.

To complete the story just let me tell you that we had tuna dinner parties two nights in a row. All our guests were serious fishos and foodies and they understood exactly what we were fortunate enough to be eating. The kids are still telling stories about how well these majestic fish fight and Maddie still feels that I saved her life by not letting her first ever tuna pull her into the sea.