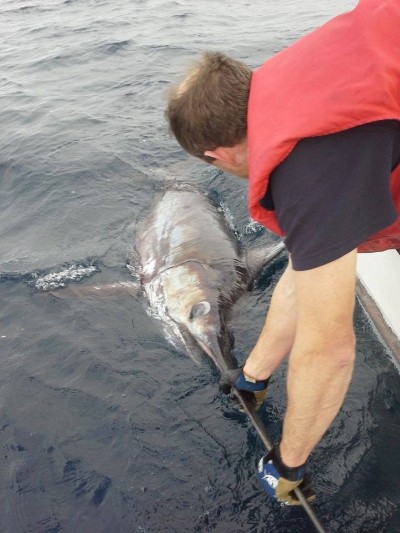 Tasmania has taken centre stage this month within game fishing circles nationally. You won’t see that often in a lifetime of fishing. Sure we are world renowned for our bluefin fishery and close proximity to the grounds, but what has excited the nation’s anglers is Tasmania’s recent broadbill swordfish action.
Overnight my aunt Fanny......
Leo Millar and his devoted crew have been putting considerable man hours both on and off the water in working out this species in Tasmania. It has long been the feeling of a number of Tasmania’s top anglers that good numbers of broadbill swordfish (xiphias gladius) are off our magical shores. The incidental by-catch from recreational long liners and a few captures on electric reels has suggested as such.
Nearly 2 years ago skipper Leo and his 1st mate Simon Turner started this journey. The two super keen gun fishos sat down and read as much as they could from the net and published papers from government bodies. Information from established fisheries from around the world have supplied insight into how these fish operate and where they are found.
Broadbill fishing also requires a technical rig allowing good bait presentation at depth. Leo has studied day time and night time rigging techniques from New Zealand and Florida. The time soak in targeting these deep dwelling powerful monsters is significant.... and that is all before we wet the bum of the boat.
The crew on Leo’s boat Choonachaser have very good wives and girlfriends as unpicking the Tasmanian broadbill secrets has meant some time on the water. Often at some crazy times of the week.
Early on in the crews missions they would leave early afternoon when there was a safe weather window and not come back off the water till the following afternoon. Unsuccessful in finding a broadbill, and testament to their unflappable enthusiasm, they would troll for a couple of bluefin on the way home.
The lads didn’t have a lot of success on their night drops and it was only when they switched to daylight techniques did they crack the code. This is a massive understatement.
Team Choonachaser have now caught 3 broadbill and tag and released one. If it were not for two slight technicalities in regard to game fish regulations the team would have tagged the 2nd and 3rd fish. Leo and his crew have a pending Tasmanian and Australian record submitted to the Game Fishing Association of Australia. The GFAA are a sanctioned body of the international body of world game fishing. The president of the GFAA is Mr Brett Cleary and one very proud fellow Tasmanian.
This leaves us with this amazing 4th fish the crew managed to hook last week.
The fish was hooked after 20 minutes of soaking a bait at 600m. YES... We all want that mark!
The big girl took angler Simon Turner to task battling high in the water and diving back down powerfully for 2 hours. The crew were always going to tag the next fish they caught and had set up to measure the fish beside the boat as it recovered.
Measuring 3.1m total length and 1.6m girth the lads with the help of growth data estimated the fish to be 170kg plus. The crew swam the magical fish until the beautiful incandescent blue they can emit returned and she was beating her tail strongly.
The work and effort has been rewarded in spades to the crew and skipper. The capture and success of these guys has been reported on national news on the mainland with a number of television fishing identities keen to get the good oil. Don’t begrudge Leo and crew for being tight lipped on a lot of the details and knowledge they now possess. I don’t blame them one bit for wanting to keep it all close to their chest for a little while.
Well done Team Choonachaser from the fishing fraternity of Tasmania.
Some details Leo is happy to divulge.
Report by Kelly Hunt. 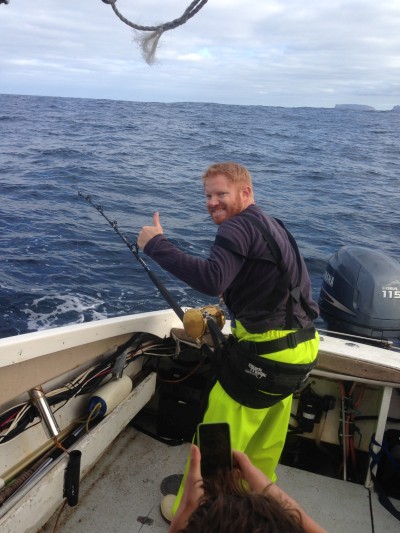