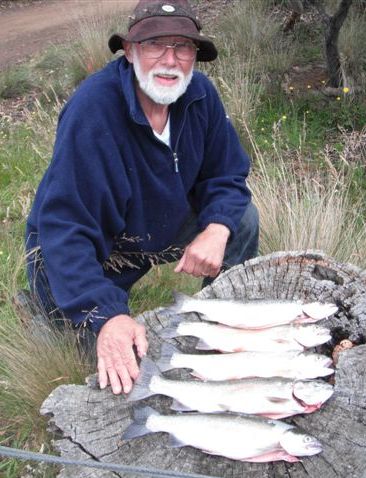 They say an impending thunderstorm brings the fish on the bite......after today I believe it.
President Johnny Dekkers and myself left home at 4 am this morning so that we could be on the water just as daylight hit. After quickly launching Johnny's tinny, we headed out in search of feeding trout...we love this water because we know only to well that there are "nearly" always opportunities to cast to feeding fish in the windlanes that regularly form here overnight.
What was a concern to us early though, was the lack of flylife on the water, apart from the odd few caddis moth flying past it looked very grim for us indeed.

After having a go at a couple of "oncers" (fish that only rise once before heading back to deeper water), we had little to show for our efforts by 7am. John then suggested we have a look behind the island for a wind slick...and there it was...the promised land!! A huge slick full of smut and trout feeding on them everywhere!!

With long /fast accurate casts required, this is where Johnny comes into his own, he caught about 8 or 9 and kept 4.. all  on a dry Zulu fly, whilst I fished with my trusty bead headed nymph a foot under a dry and finished with four...only keeping one.

Most fish were rainbows, with three or four browns thrown in for good measure...as a point of note, one of the browns I caught (and he is in the photo below) is the most "silver" brown I have ever seen, if I didn't know better I would have called it for an atlantic salmon.

Many other chances were had with a few fish lost and a couple of bust off's. Johnny had a ripper on for a couple of seconds before it pulled free.

The water is clear again (thank god) and the fish are fat strong and healthy......the Inland fisheries stocking program is clearly going to be a success here and this was evident today with the number of juveniles we caught and released.

This place is going to be "gold" next year when they get a bit bigger....today it was "gold "for us. We fished to fish until around 11am, the overcast sky's keeping the fish on top. Once the first rumbles of thunder were heard, we headed for home.

As a sidelight, if you catch a monster out of this water and it has a big lump in its belly, could you please return my mobile phone?..(heavy sigh). 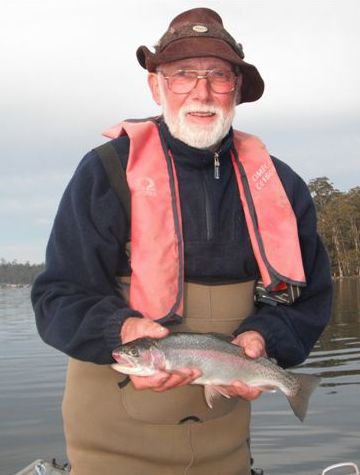 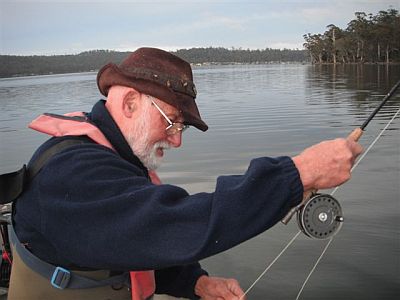