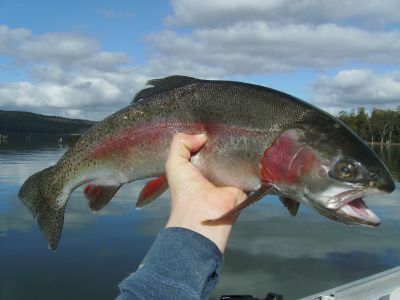 The first entry in the "Win a Groper Bandana" Competition!

With not a breath of wind and the sun shining, Connor and I decided to go for a "Late Morning Fish". We hit the water by 11am, and were soon trolling. We both had on Tassie Devil lures, an S11 Funky Frog for me, and a #110 Perch for Connor.
We were soon up past Clark’s point, when Connor says, “Let’s pull in here and have a flick or two”. I changed my lure to a Moore soft plastic, in a pumpkin seed colour rigged up with a 1/12 jig head.
First cast, it was near a big old stump, I let it drop, and picked it back up, let it drop again, and I felt a tap, I then was on! I set the hook, and it was the battle between me and this fish!

I wasn’t letting this on get off.

After a while and few laps around the boat, the fish was getting tired; I landed it in the net! I was very pleased! Not only was it my 2nd trout for the season, it is my biggest trout ever!

We fish that area for another 40 or 50 minutes then we move to a different location just off the point. Connor goes to have ‘another’ look in his tackle box, when his rod nearly goes over the side, looking and grabbing his rod quickly, he had a small rainbow having a crack at his black and gold that was bobbing up and down in the in the water. Oh, Connor didn’t catch It, it got off!

From here we went back around Kalangadoo Bay where we called it quits for the day, as we were getting a bit hungry.

Got back to the boat ramp and had a chat to a couple of fellow who has also caught a nice feed also.

Great day’s fishing with Connor. Although I was watching him with the net... you never know what he might try and do when he’s not landing any trout in the boat! 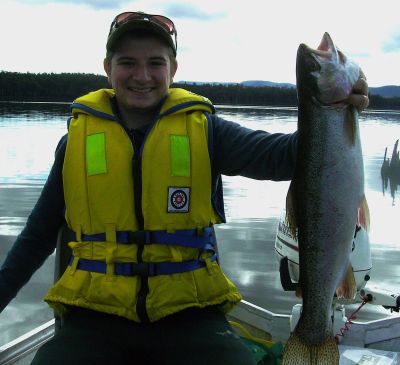