Grandson finally catches the biggest fish for the day
Pop come over again from Bicheno today to show us grandkids “How to catch a big trout” and to see if he could show us young’uns up again, like last trip out on the lake! We ditched school at 1pm (not really, for those whom don’t know we are schooled through distance education and seeing that Connor and I had all of our tasks up to date, we got to knock off early and as you all know fishing is VERY educational!)
We were on the water around 10 past 1, with a north westerly blowing, we casted out some lures. Connor and Pop both had on a Black/bronze/red spinner with a fly dropper and I had on my new Hawk Sniper lure! We were trawling for about 30 seconds, and.… yep Pop had hooked one!  He caught this one on the spinner; it was a nice little brownie, 34cm.We headed off for a drift spin for a while. But no luck, only a few perch.
We decided to head up to Clarks Point where we were trawling for around 2 minutes, until Connors rod went wild, looking behind and seeing this big brown rise up out of the water, Connor was hoping it wouldn’t get off and took him around 4 minutes to land, he’d caught it on the fly dropper. Measuring 48cm and an easy 3lb, in great condition!
Surely it then had to be my turn, I thought!  We trawled and trawled up to the big timber, then heading back to Kalangadoo Bay, where the wind turned to the east, what I was hoping not to happen. We headed back up to where we caught the 2 browns before, next thing I hooked a nice little rainbow, dropping it at the boat, Bugger!  We stopped and had another drift spin near where Connor had caught his brown, when Pop hooked another brown but his fly dropper hadn’t been tied on right and lost it. He then had another cast and the old bugger hooked YET ANOTHER BROWN! It jumped and spat the lure.
It was a great couple of hours out on the water, with fish being caught and seeing other fishermen bringing in nice catches as well.
It’s nice to see the lake fishing well at the moment.
Samuel Evans 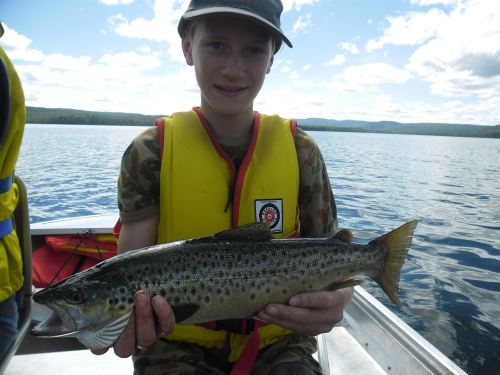