Well, with a few calm days on our hands. We were hoping we might have stirred up a few fish. We stirred them up alright, just not enough to jump on to our lures! With follow after follows, no such luck.

Bruce Holmes a regular fisherman to Lake Leake from Hobart had offered to take Connor and me out on Friday, to see if we could rustle up a few trout. (Bruce had yet to catch a trout for the season, as he has been busy with his new business!)
We left 9am Friday Morning, with 25km/h westerly winds blowing. We had a bit of a trawl around the lake, but we decided to wind in to find some sheltered water.  We threw the drogue out to slow our drifting down.
I was using a Yep Golden Seducer, Bruce was using the Red Nose Brown Bomber Tassie devil, and Connor was using a black and gold soft plastic.
Connor decided to have a bit of morning tea, then Bruce’s phone rang, Bruce quickly passed his rod on to Connor and yep, you guessed it, good old Connor had to hook the fish of course!  He was fighting it for a while but then dropped it. With not another bite, we decided to wind in and shoot across to the other side of the lake. We trawled from Gallows point around in to the Snowy, getting a few more touches, but no trout.
We decided to go into shore and have some lunch. A hatch of Dunns had just hatched, whilst we were having our lunch, we were now just waiting for some fish to start rising on the water. After waiting half hour we saw the first rise of a trout, we all rushed for our fly rods and waded out a bit, hoping that we might hooked one, but no such luck.
We jumped back in the boat where we decided to go for a trawl across the bay. We were about to turn around when I go to Bruce, ‘I think you have a fish on’ he winds it in a bit, but no must had been some weed, about 20 seconds after that his rod screamed! Bruce grabbed his rod and started winding, I had to manoeuvre the boat about to we didn’t end up on the bank. Finally getting it to the net, it was a top condition Rainbow trout, around the 2.5/3lb. Bruce has landed his first trout for the season.
We threw him in the live well tank, just in case we got a bigger one and could have let this one go. He caught it on a Rapaler deep diver.
After fishing for another hour, swapping and changing lures; we decided to head back to Kalangadoo Bay, where Bruce says, I’ll just give the trout a bit more water, he puts some water in, opens the lid again to put in some more and the mongrel of a thing jumped clean out of the live tank in to the lake! We couldn’t believe it! Oh well, at least he’s there for someone else to catch! From there we decided to pull the pin and head back in as the wind had picked up to around 40km/h. Loaded the boat and headed back up the road.
All in all, it wasn’t a bad day out on the water, with the only fish being caught jumping out of the live well!
Thanks again to Bruce for taking us out and giving us boy’s a few tips from another fisherman’s point of view.
“Find the Time, and Wet a line”
Samuel Evans 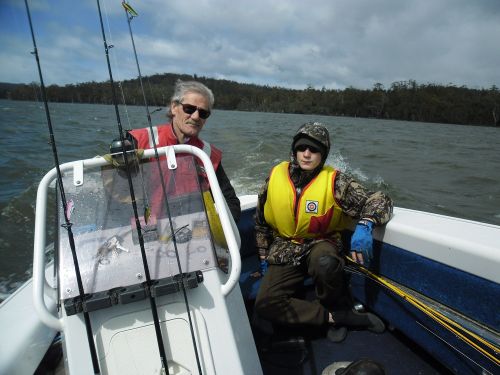 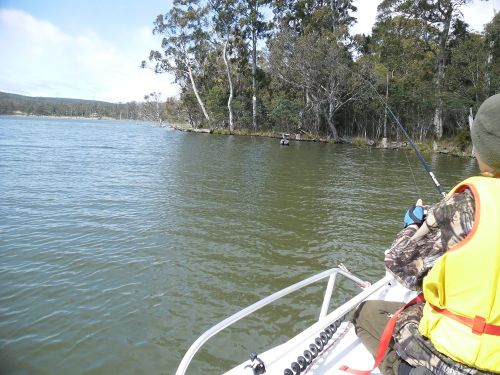 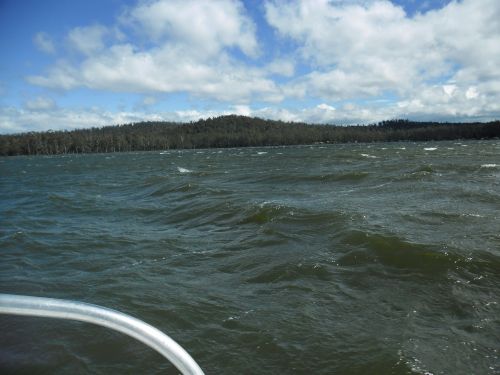