Well, what a start to the 2013/14 trout season.
Awaking up to reasonable strong wind gusts and a light frost we headed of down to the lake deciding to leave the tinny in the shed as the 3hp motor wouldn’t have got us far in the wind!
I took my fly rod, and Connor had his spinning rod with the trusty old green and gold spinner! We were fishing for around half an hour, and Connor had a nice brown have a crack at his lure, but to his disappointment it got off.  With a cast here and a flick there, there didn’t seem much movement at along the shoreline.

With frozen hands and cold feet we decided to head back home where mum was cooking eggs and bacon. Connor goes, just one more cast and I’ll come. Low and behold if there was a fish to be caught it would be on his line. The little bugger hooked this beaut rainbow! Fighting it for a bit he finally landed it, (with 2 other fisherman watching) it didn’t have much of a tail left,(I would say the cormorants have had a bit of a chew on it) but Connor was happy he landed a nice rainbow for the start of the season. We headed back up for the eggs and bacon. Connor being so excited he had forgotten about being cold. We show Mum and Dad the fish, then back down we went.
We had seen Mick (our next door neighbour, who has been patiently teaching us how to tie flies and fly fish), Bruce and Kevin (Micks mates) out on the point with their boats up on shore, so we decided to see how they had went. They hadn’t caught a fish, let alone seen one. And here’s Connor bragging how he had caught the first trout of the season being 2lb… bla bla bla you know what little brothers are like.
As the wind was still wild, we thought we would wet a line back around at the boat ramp. Mum had bought Ellie-mae down for a fish; Ellie-Mae got a snag. “Sisters, I tell ya…” I tried to get it out, but it was out too deep.
Dale from Yep Tassie Tackle was putting his boat in and he being such a top bloke kindly got it out for Ellie-Mae. After having a bit of a chat to Dale he gave us some lure to trial in the lake (Thanks again, Dale) and then headed out, with the wind picking up, and the lake getting choppier.
A few boats started to head in and even though it was freezing cold we persisted on catching another. No fish action at the boat ramp, but it was great to have a talk to the fishermen and women who had been out on the lake. One guy and his wife, had only caught one little tacker so he released it. We helped him load his boat on to his trailer and off he went into the warmth of the vehicle.
Another feller came in who had caught a nice 3lb rainbow, and reasonable size brown. It was quite funny because all of the fisherman and women we were talking too said. “You boys were in yesterday’s paper!” “Yep, it was us alright keenest fisherman in Tasmania that’s us!”
We met up with Mick, Bruce and Kevin again they still hadn’t caught any, but Bruce had around a 5lb Brown on but dropped it, he us if we wanted to go out for a trawl with him, so we gave him our rods and ran back home to get our life jackets. As came back down to the boat ramp Mike Stephens and his mate was coming in. They had only caught one trout, we had a chat to him and Mike gave Connor and I a Tasfish beanie (Thanks for that Mike it will come in handy on days like today!!)
Bruce came in and picked us up, we trawled across Kalangadoo bay, I had on a Golden Seducer but it was a bit rough for trawling, so we kind of gave up and went into shore were Mick and Kevin were, and waited for the wind to hopefully die down.
The wind stayed the same as it started to rain; we had a fish off the shore with some soft plastics, and hard bodied lures. An hour passed, the rain started to really bucket down, and we made the call that no fisherman likes to make but it was time to head home!
So back across Kalangadoo bay, back to the boat ramp, load the boats on and go  400 meters up the road, and arhhhh a nice warm fire to come home to.
Best part living in a place like Lake Leake is, if the weather cuts up too bad,  just come home, when it all good again, you can go fishing!
Big thanks to Bruce for taking us out on his boat, and for giving us some lures.
Also, big thanks to Dale from Yep Tassie Tackle and Mike from Tasfish for giving us the lures and beanies and taking the time to stop and have a talk to us junior fisherman, I often send them an update on how the lake is fishing and to meet them in person was awesome, and to see them fishing Lake Leake was pretty cool, just a shame the weather wasn’t a bit nicer for them.

I hope everyone had a great opening morning with tight lines. Some nice trout were caught out of the lake, so here’s to a great season 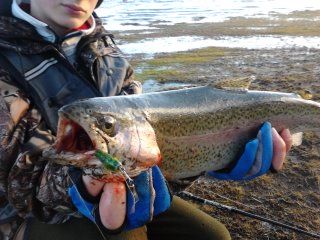 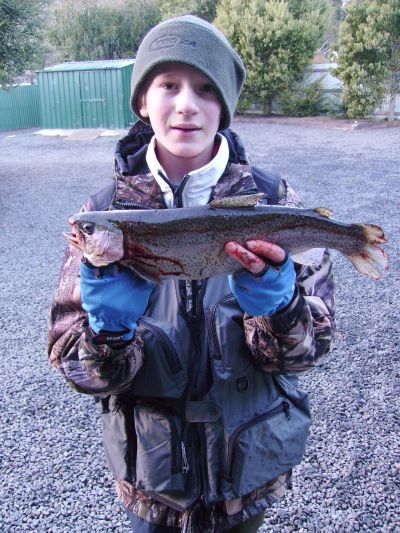